ROCKVILLE, Md. (DTN) -- Checking for sensitive crops before spraying a herbicide is always a good bet, but for some applicators, it's also the law.

Anyone spraying over-the-top dicamba herbicides is legally required to document that they checked a sensitive crop registry for the area surrounding the field and keep that documentation for two years. While some state- and crop-specific registries exist, for most applicators, this requirement will be met by one company: FieldWatch.

To aid applicators moving through the rapid-fire pace of spring and summer herbicide applications, FieldWatch added a mobile app option four years ago, which allows users to snapshot the time, date and location they checked the registry.

MAPS ON THE MOVE

Demand for FieldWatch's mapping software has grown in recent years, especially after EPA's 2017 decision to add checking a sensitive crop registry as a label requirement for over-the-top dicamba herbicide labels, which currently include XtendiMax, Engenia and Tavium. The company has multiple platforms: DriftWatch, a registry for specialty crops and organic growers, CropCheck, a registry for row-crop producers, BeeCheck, a registry for beekeepers, and FieldCheck, the portal for applicators to use.

So far, 22 states are signed up with the registry, as well as one Canadian province, Saskatchewan. See a full list of states here: https://fieldwatch.com/…. More than 50,000 farmers and beekeepers map properties totaling roughly 1.4 million acres through the company each year, of which almost half are certified organic acres, FieldWatch CEO Bob Walters told DTN. More than 10,000 applicators are also registered to use it. For now, the service is free for farmers and beekeepers to register their fields, as well as for applicators to view them. A paid registered applicator service does exist, however, which gives applicators more access to the mapped properties they are navigating, such as data downloads and contact information.

Walters said he hopes to keep the platform mostly free for users, as the company leans on state funding, fees from registered applicators, software company partnerships, and sponsorship from trade organizations and large agrichemical companies such as Bayer, Corteva, Syngenta and BASF. See the full list here: https://fieldwatch.com/….

Even farmers who don't think they use FieldWatch might actually be doing just that, thanks to the company's growing partnerships. So far 14 ag software companies, including services such as Agrible, Granular and AgVantage, partner with FieldWatch and integrate its data into their own mapping systems. "That has helped us magnify our reach," Walters noted. "The views on our maps through these providers are significant."

The company is also looking to expand its CropCheck registry, which is designed specifically for corn, soybean, cotton and rice growers who want to alert other farmers to their row crops' sensitivity to dicamba, 2,4-D or other herbicides. So far, only five states -- Arkansas, Indiana, Illinois, North Carolina and Ohio -- are using this registry.

"We'd like to double the number of states using that tool," Walters said. "Because drift continues to be a problem in row crops as well as organic and specialty crops."

As a pesticide drift investigator, Beth Carter has seen the price of herbicides moving off target.

One memorable mistake involved a plant growth regulator applied to dandelions within a stone's throw of a commercial greenhouse full of tomatoes. "It was a very expensive mistake," recalled Carter, who works for the Office of Indiana State Chemist.

Carter now also works on the other side of this spray equation, as a data steward for FieldWatch's mapping platforms in Indiana.

Use of DriftWatch and CropCheck registries in Indiana has been growing each year, largely driven by the rise in dicamba-tolerant crops and the off-target movement problems that have followed that technology's rollout, she noted. Non-dicamba-tolerant acreage, such as Enlist crops, is expanding in soybean-growing states like Indiana this year, which will make CropCheck appealing for more growers, Carter said.

"I think it will keep growing this year," she said. "The issues surrounding it just aren't going away -- there are still so many issues with new herbicide technologies coming on the market. Agriculture has changed in so far as you don't always know what your neighbor is doing anymore."

Another new growth area for the company is FieldWatch's Seed Field Check registry, which works with seed companies to mark fields that will have detasselling crews moving through them.

"We modified our platform to allow six seed companies to map all their seed fields in Iowa -- about 1,500 fields alone in Iowa," Walters said. "The seed company would log in each day and change the status of a field to occupied, and that information was then in a repository that all the seed companies, and any registered applicator with FieldWatch could see." In 2021, four more states -- Indiana, Illinois, Michigan and Nebraska -- will join Seed Field Check.

The company has aspirations beyond the U.S., as well. In addition to its recent move into Canada, there has been some interest from officials in the EU and Mexico, Walters said. "Our mission is the same as it was when we started 10 years ago," he said. "We're communicating where specialty, organic or sensitive crops are so applicators can be aware before they spray. We want to continue to be free; we want to continue to be voluntary."

For now, the company is in the midst of its annual renewal of all mapped properties. Each year, users are required to log on and verify that the fields and beehives they mapped the previous year are the same or make changes as necessary. Any user that doesn't renew their mapped property will be removed from the system.

"The number one thing for us is to maintain the integrity of our data each year," Walters said. "If our data are not accurate and validated, people get skeptical."

New users' mapped properties are vetted and approved by a state-level official known as a data steward, the role Carter fulfills for Indiana.

A lot of her vetting relies on the honor system, as mapped properties are far-flung across the state, but Carter reviews each one to make sure there are no logical inconsistencies. "I can make sure there isn't a cornfield mapped in the middle of a city," she explained. "Whether someone has a 200-acre corn field or it's a soybean field -- I can't police that."

Mostly, Carter spends her days correcting user mapping errors and fending off homeowners and gardeners who want to map their noncommercial yards or gardens, which isn't permitted. But the work has paid off in surprising ways, she said.

For example, last fall, the state had an outbreak of Eastern Equine Encephalitis (Triple E), a mosquito-borne virus that can kill horses and cause brain damage and death in humans. "We had to do extensive aerial pesticide applications up north," Carter recalled. Using DriftWatch data, the pilot applicators were able to avoid spraying over organic properties.

Crop producers and beekeepers have also used FieldWatch registries to mark their property near railroads or right of ways, which are often sprayed by companies or state or municipal workers.

"Ultimately, it's free insurance for many people," Carter said.

For more information on FieldWatch, its registries and funding, see the company website here: https://fieldwatch.com/…. 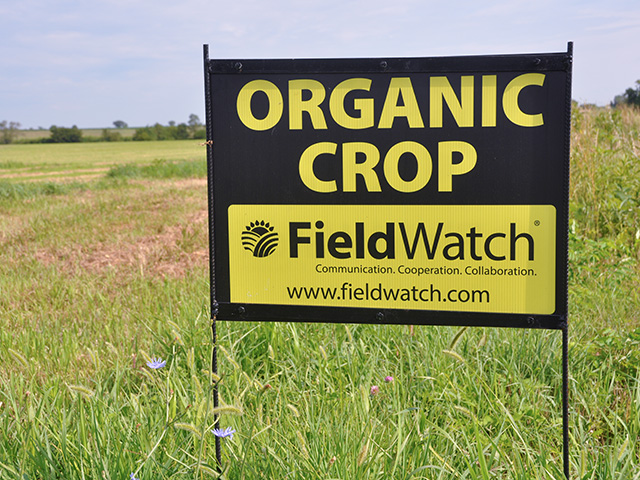