ROCKVILLE, Md. (DTN) -- Worried about spraying dicamba too close to specialty crops or bees in 2019?

FieldWatch is a non-profit that allows farmers and beekeepers to register and map the boundaries of their specialty crops and beehives for pesticide applicators to avoid. Although the company was established well before dicamba-tolerant crops were commercialized, it has spent the past two years growing rapidly and adding features and tools to protect dicamba-sensitive sites.

For example, North Carolina first joined FieldWatch in 2016, driven by a federal pollinator health initiative. The state got tens of thousands of beekeepers logged into the company's BeeCheck registry, which maps apiary sites.

Then, dicamba-tolerant soybeans hit the landscape in 2017, and the state's focus shifted.

"Tobacco is our top specialty crop here in North Carolina," said Jason Williams, pesticide operations specialist for the North Carolina Department of Agriculture and Consumer Services. "It is also one of the most sensitive crops to dicamba. Most of the state's tobacco is grown under contract and those contracts stipulate no tolerance to chemicals, so if they get dicamba injury, the crop has to be destroyed."

At first, the state's farmers were hesitant to publicize their crops and boundaries, he said. But after the first year of dicamba-tolerant crop production and off-target movement in the state, the amount of tobacco acres registered with DriftWatch in North Carolina "doubled, if not tripled," Williams said.

It's a familiar story to Bob Walters, director of business development for FieldWatch. Before dicamba-tolerant crops joined the agricultural landscape, FieldWatch's growth was driven largely by federally mandated state pollinator protection plans and the steady rise in organic crop production.

While both of those factors still contribute to growth, the company has seen an enormous jump in customers in the past two years, as specialty crop producers, beekeepers and even row-crop farmers seek to protect themselves from dicamba drift.

HERBICIDE HEADACHES AT THE HELM

Across 20 states, thousands of producers have mapped and labeled 34 different types of specialty crops in DriftWatch, from grapes and tomatoes to nurseries and greenhouses. After creating an account with FieldWatch, pesticide applicators can log in and check their region for nearby sensitive crops before spraying. The mapping and communication tools are free for all users.

Between 2017 and 2018, the number of pesticide applicators registered with FieldWatch doubled to 5,300, and the number of specialty crop and apiary sites jumped 77% to 32,000. When California joins in the spring, the number of participating states will reach 21, Walters added.

North Carolina participation will continue to grow, as Xtend acreage expands and 2,4-D-tolerant Enlist soybeans join the landscape in the coming years, Williams predicted. "We have a very diverse agricultural system in North Carolina -- we have a lot of specialty crops," he said. "A lot of [growth] will come from word of mouth ... and newer, younger growers who are more adept with computer technology will drive it, too."

Dicamba use has prompted FieldWatch to create a number of new features and tools. The company added a time-and-date stamp to the registry maps two years ago, when they learned that applicators were taking screenshots of the registry to prove they had complied with federal dicamba label requirements, Walters said.

FieldWatch also launched an app in 2017 to simplify applicator use of DriftWatch and BeeCheck, Walters said. Applicators can pull the registries up on a phone or tablet and view specialty crops and beehives within 10 to 15 miles of their location.

Specialty crop growers aren't the only ones seeking protection from herbicide drift anymore, either.

Walters said FieldWatch has fielded and declined requests, sometimes from state officials, to add butterfly habitats, bogs and pollinator strips to DriftWatch. Most recently, however, the company has heard from commercial row-crop farmers seeking drift protection for their non-specialty crops.

"Last year, we had to reject a lot of sites submitted in states like Indiana and Illinois, where people were trying to put non-dicamba-tolerant soybeans on the DriftWatch registry," Walters explained.

So this year, FieldWatch is launching CropCheck, a new registry where row-crop producers can register their herbicide-sensitive fields, such as non-DT soybeans and non-GMO crop fields. Four states are already signed up to use Crop Check in 2019: Indiana, Illinois, North Carolina and Arkansas, which ran a pilot program of the tool last year.

"Our expectation is that we'll have at least 500 to 1,000 sites on it this year between those states," Walters said.

FieldWatch is working hard to keep up with the demand, he added. The registry was first developed and launched by Purdue University Agriculture and Biological Engineering Department in 2008, but spun off into a non-profit company in 2013.

Signing up as a grower, beekeeper or applicator is free. States do pay an initial registration fee when joining FieldWatch and then an annual maintenance fee. But mostly the company relies on funding partnerships with private companies, particularly agribusinesses like Bayer, Dow, BASF, Syngenta and Valent, Walters said. They also receive support from companies that access their data and make it available to their own customers, like John Deere.

EPA's labels for XtendiMax, Engenia and FeXapan require applicators to document that they checked a sensitive crop registry before spraying. In most states, FieldWatch is the only available registry, and XtendiMax's label actually mentions the company by name. To date, however, the company has not received any direct federal funding, Walters said.

States interested in joining FieldWatch can reach out to the company and Walters here: https://fieldwatch.com/…. 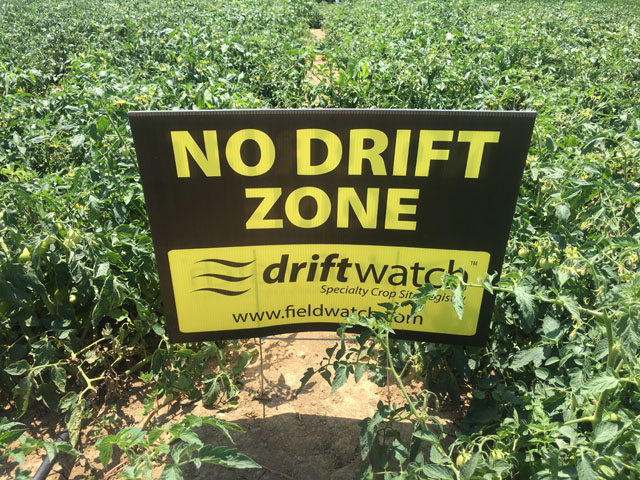