OMAHA (DTN) -- Free nitrogen fertilizer would be a cost-saving dream for most corn growers. Turns out, more may spill from the sky in the form of rainfall than farmers might expect.

New research from the University of Minnesota Extension shows more nutrients are falling in Minnesota's farm fields in the form of rain or snowfall than previously thought.

In addition to more nutrients, the pH of the rain and snow was higher than researchers expected. This could have an effect on nutrient availability.

While the findings may not change fertilizer recommendations just yet, it is worth keeping your eye on the skies.

Paulo Pagliari, University of Minnesota Extension soil fertility specialist and lead researcher on the project, told DTN the study came to be from other research he was already doing. In the past, he did some work with biological activity in soil and looked at nitrogen (N) sources in the soil.

He decided to see how much nitrogen was available for plants from the environment. Thanks to a grant from the Agricultural Fertilizer Research and Education Council (AFREC), Pagliari searched for nutrient levels in precipitation.

University of Minnesota Extension researchers installed rain gauges and snow collection stations at five locations across the state -- at Crookston, Morris, Becker, Lamberton and Waseca. They began collecting samples in spring of 2019 and continue to monitor precipitation levels.

These results are slightly higher than the National Oceanic and Atmospheric Administration (NOAA) data. That research shows that between 6 to 8 lbs. of nitrogen is deposited annually in Minnesota.

Research from the Oklahoma State University in the early 2000s showed similar data as what NOAA found (http://soiltesting.okstate.edu/…). Three locations in central Oklahoma (El Reno, Woodward and Chickasha) averaged about 3 lbs. of nitrogen per acre per year.

The state of Minnesota is trending both warmer and wetter. According to a report from the Minnesota Department of Natural Resources (DNR) (https://www.dnr.state.mn.us/…), the state has warmed by 2.9 degrees Fahrenheit between 1895 and 2017 and now gets 3.4 inches more a year. The most dramatic changes have come in the past several decades.

"Heavy rains are now more common in Minnesota and more intense than at any time on record," the report said.

DTN Senior Ag Meteorologist Bryce Anderson said that, notwithstanding this summer's flash drought in parts of the Midwest, there is "no doubt" that the entire Midwest (https://nca2018.globalchange.gov/…) is in a sustained wetter weather pattern. Both 2018 and 2019 set new records for the most precipitation in Minnesota, with the previous record being 1993.

"In addition to sustained wetter years, the Midwest is showing a long-term trend of heavier spring precipitation and more heavy precipitation events, where a lot of precipitation occurs at once," Anderson said.

Pagliari said variations within the state depend on how many nitrogen sources there are in a certain area. The Becker site, for instance, has many corn fields and livestock operations in the area.

The more nitrogen sources that are present, the more nitrogen in the environment -- in this case in the form of both manure and commercial fertilizer. These can volatilize into the atmosphere and then fall back down later in a different place, he said.

Roughly three-fourths of the nitrogen measured was in the ammonium form, while the remaining one-fourth was in nitrate form. Ammonium deposition was higher in the spring, while nitrates were commonly found in the summer samples.

"We also found lighter rains around a half-inch had higher nitrogen levels," he said. "Heavy rains around 2 inches tended to dilute the nitrogen in the atmosphere."

Pagliari said he doesn't believe university nitrogen recommendations will change much in the future because of his research, unless future data shows even more nutrients are found in precipitation.

Nitrogen is coming down in rain, but it varies from year to year and by location. If you applied less nitrogen expecting it to come from precipitation and there was a drought, you would be short both rainfall and enough fertilizer, he said.

Pagliari said one interesting finding from the study was the pH of the precipitation was about one point higher than what the NOAA reports for Minnesota. Captured rainfall was also more alkaline, and right now researchers really don't know why that is.

The alkalinity or acidity of the moisture could be important because alkaline precipitation may make the soil less acidic, he said. Alkaline soils tend to have higher nutrient availability.

More research needs to be done to see what effects alkaline rainfall would have on soils, Pagliari said.

The study also looked at sulfur deposition. Because of the stricter regulation of emissions, sulfur deposits in North America have fallen significantly (https://www.nature.com/…). Many farmers will apply sulfur, something that was not necessary in the past, he said. (https://www.dtnpf.com/…)

Between 5 to 10 lbs. of sulfur fell over Minnesota in the first year of the study.

Pagliari said that, in year two of the study, they will look for other nutrients that are known to be sources of alkalinity, such as potassium, calcium, magnesium and aluminum. These nutrients could be found at higher levels due to the alkaline levels of precipitation, he said.

As far as nutrient levels in precipitation across a region like the Corn Belt, Pagliari said he is not aware of any other studies on this subject. To have a study of this scale, several land-grant universities would have to be involved and federal agency funding would be necessary, Pagliari said.

The University of Minnesota Extension Minnesota Crop News website had an article about measuring nutrients in rainfall. The article can be found at https://blog-crop-news.extension.umn.edu/…. 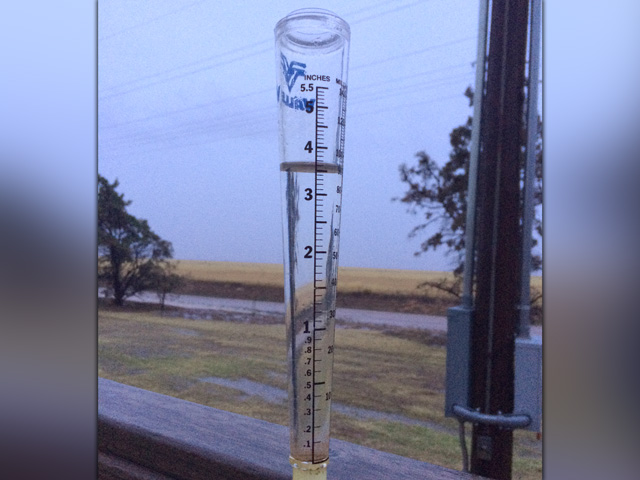