OMAHA DTN) -- Dry conditions and several damaging spring freezes have left a variable Kansas wheat crop racing toward harvest. A three-day tour of the state this week estimated the crop at 44.5 bushel per acre, compared to the most recent USDA/NASS forecast of 47 bpa on May 12.

The tour yield estimates for each region were:

The virtual tour was a pandemic replacement for the long-held Wheat Quality Council's Hard Red Winter Wheat Tour. In addition to a revised sampling technique (and fewer samples) the tour used a USDA formula to devise estimates.

Scouts headed to the central region of the state on Thursday for the third and final day of the tour. Kansas State University wheat and forage agronomist Rumulo Lollato remarked that the tour provided a good snapshot at this time, but rainfall would be needed to help much of the crop reach its full potential.

"Western and southwestern Kansas, though, may get more storm features than rain. I'm referring to strong winds and hail," he added.

Western Kansas was showing long-term symptoms of drought stress, including extremely reduced plant height and maturity acceleration. Many of the fields are achieving later stages of development at only 9-15 inches tall because of the prolonged stress. The lack of growth will reduce the crop's yield potential, but also create difficulty during harvest.

Lollato was reluctant to give his estimates on how many acres will make it to harvest, but said he does expect average-or-above abandonment this year. He also warned farmers to keep an eye open as stripe rust is beginning to move, adding yet another threat to yield, and whether the stand warrants economically warrants a fungicide application.

DTN Lead Analyst Todd Hultman put the Kansas numbers into perspective, noting that according to USDA, 52% of this year's U.S. winter wheat crop is rated good to excellent, the third highest rating in eight years and close to the path travelled in 2017.

"While the Kansas tour's 44.5 yield estimate is not necessarily predictive of the final U.S. yield estimate in 2020, it does suggest that winter wheat production in this important region will be down from a year ago. Overall, the tour suggests USDA's current winter wheat crop estimate of 1.25 bb for 2020 could be a little too high," Hultman said.

Details on those states can be found in DTN's previous reports:

For more full details of the wheat tour go to: http://kswheat.com/… 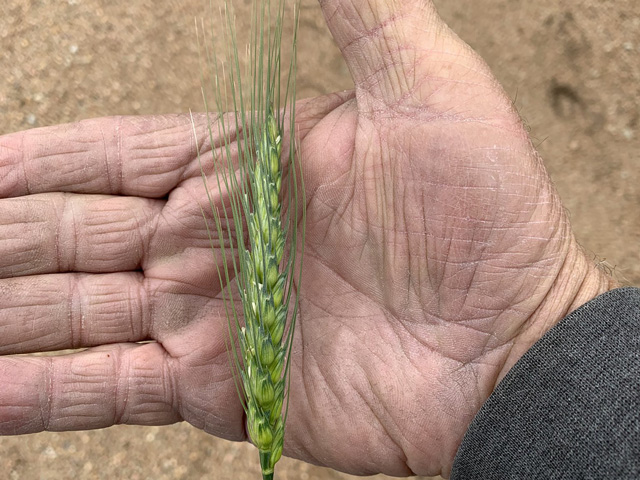