OMAHA (DTN) -- Wheat scouts zoomed in on the Kansas wheat crop Tuesday in the first day of a "virtual tour." Day one found a highly variable crop in the northwest and north-central portions of the state.

This year, Kansas Wheat has teamed with certified crop advisers, Extension agents, elevators, farmers and others to pull wheat samples across the state. The assessment of those physical samples is being virtually presented each evening with a final yield estimate scheduled for Thursday. Estimated yield potential is calculated using the formula provided by USDA-NASS this year.

For the past 50 years, the Wheat Quality Council has conducted a Hard Red Wheat Tour of the state with a caravan of scouts making several hundred stops each day. Harries said the 2020 tour, rapidly put together to respond to it being derailed from COVID-19, will have much fewer samples, but lean heavier on seasoned scouts.

In what seems to also be a sign of the pandemic times, Kansas State agronomists gave detailed evaluations of what they saw, sometimes over sketchy rural internet connections.

Jeanne Falk Jones, Kansas State agronomist in the Sunflower District, noted that northwest Kansas had a wide variety of wheat conditions, with most of the stress seen coming from drought and freeze damage. "April was rough on wheat," said Jones.

However, she also noted that fall conditions set up the rough conditions. "A lot of what we were seeing didn't have good fall growth and had poor root development," she said. Many fields could have been improved with better moisture management from the start, she added.

Short, thin stands were not unusual across the region, and she mentioned concerns that these areas could see weed pressure prior to harvest. Winter annuals such as mustards, downy brome and cheat lead her watch list. Brown wheat mites were reported present because of drought conditions and aphids were being found, but ladybugs mostly had them under control.

Romulo Lollato, Kansas State assistant professor of agronomy and wheat and forage Extension specialist, spoke to those listening in directly from the wheat field -- not the one he'd originally chosen, but one where he could get a decent signal.

Lollato said if he had to pick one thing that was taking a toll on the wheat crop in north-central Kansas where he scouted Tuesday, it would be drought stress.

"North-central Kansas is 5 inches or so behind where they should be in a normal year," said Lollato. The drought also accentuated the freeze damage, he added.

"If we had enough moisture, the plants would have recovered much better. But here we were in very dry conditions, so it really is a combination of drought and freeze causing concern," he said.

He noted that the extreme cold was hard on tillers. He showed a picture of a field in Osborne County in north-central Kansas with trapped heads from freeze damage. Early tillers killed by freeze are also common.

Side reports from Colorado and Nebraska also reflected a struggling wheat crop. Brad Erker, executive director of Colorado Wheat, said current estimates in that state put abandonment at 25%, and that figure could climb higher if drought continues to widen. He gave an average yield estimate of 32.5 bpa on a harvest of 1.7 million acres for Colorado.

Royce Schaneman, executive director of the Nebraska Wheat Board, reported a crop that is very short of stature in that state. He said early estimates pegged the Nebraska crop at 50.88 bpa for a 42.075-million-bushel total, but he believes the actual numbers may be closer to 41 million to 41.5 million bushels as producers decide some tillers that looked good earlier won't make.

On Wednesday, the tour heads to west-central and southwest Kansas. "Our drought has expanded and worsened in southwest Kansas," Harries said. "Disease continues to erupt pretty quickly across the state. It's really going to be a race. If the forecasts hold true and we continue with moderate temperatures and some rainfall, we really expect that stripe rust to explode. That's going to be a challenge for farmers out there to decide if they are going to go ahead and treat that with fungicides." 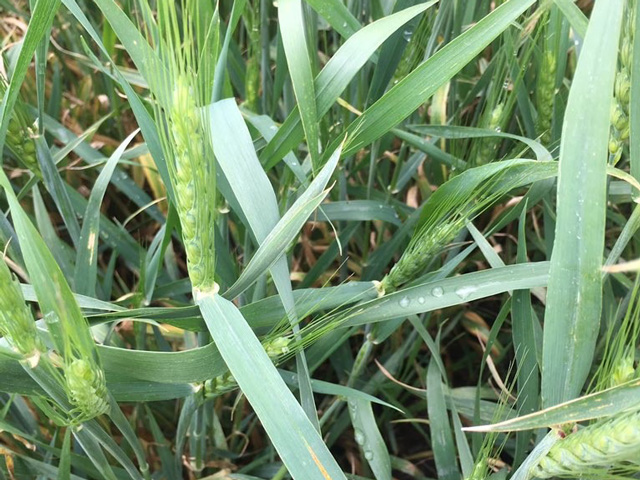