OMAHA (DTN) -- Romulo Lollato skeptically eyed a dark cloud floating overhead as he electronically delivered assessments from the second day of touring Kansas wheat fields. On Wednesday, crop scouts fanned out across the west-central and southwestern regions of the state where it was clear a combination of drought and freeze have taken a toll.

Yield estimates in both regions ranged from a gut-punch low of 11 bushels per acre (bpa) to a high of 70 bpa. Scouts estimated an average 42.5 bpa in the west-central portion of the state and 32.9 bpa in the southwest region.

Lollato, a Kansas State University agronomist, said the tour did not reach the extreme western parts of the state, where conditions are actually more severe. He also cautioned to keep in mind that scouts are measuring potential.

"It's a snapshot. It has that potential, but it needs a rain," said Lollato. Can wheat extremely damaged from both drought and freeze recover? "It depends on the stage of the crop," he noted. "For those fields that are still in boot or early flowering, rain can help quite a bit," he said.

The weather during the last 30 days of a crop's life can make or break it, he added. "The closer we are to maturity, the less likely we will recover that yield. But it is important to note that if there are only a few primary tillers, there's also a limit to how much the plant can recover." Scouts did see some fields that had already been terminated.

Kansas Wheat Commissioner Gary Millershaski provided perspective to how drought grabbed hold of the crop in southwest Kansas. "In mid-August (2019) Mother Nature decided we'd had enough and the spigot got shut off. Actually, to date, since the middle of August, I've only had 3.9 inches of moisture and we're dry," said Millershaski, who lives near Lakin.

He said about 40% of the fall-seeded wheat emerged on schedule. He reported that where the drought monitor shows red, a fair amount of wheat didn't germinate until February.

"I call it spring wheat, but it is winter wheat that didn't come up until this spring. It just doesn't have the root structure, doesn't have the tiller counts and it is hurting," he said. The hard freeze that came three weeks ago also delivered a bigger blow to this late-emerging wheat.

"There's still some decent potential in some of that earlier-emerged wheat, just because it had a higher number of tiller counts -- even though we lost the majority of them."

Quality might be given a boost, although he wasn't counting on it yet. "We pretty much fertilized for a 50-plus-bushel crop and there may be a few fields that are going to push that, but for the most part, we're looking at a 30- to 31-bushel average," he said.

DTN Senior Ag Meteorologist Bryce Anderson said that, in early March, drought was noted just in the southwest and northwest corners of the state. "There is some phase of drought now in effect over the entire western half of Kansas, according to the U.S. Drought Monitor. And almost one-third of the western half is assessed as having severe to extreme drought," said Anderson.

The combination dry conditions and April freeze were echoed by Mike Schulte, Oklahoma Wheat Commission executive director. He gave a review of the May 5 Oklahoma Wheat Tour and discussed some of the changes seen in conditions since that tour took place.

Schulte noted that the eastern part of the Panhandle has good potential after recent rains, but the rain in the rest of the Panhandle was too late to help. The north-central and west-central part of the state has received rain since the tour, with Schulte calling it "the bright spot in the state." He noted that most of the crop is clean and healthy, but there are spots affected by drought that won't recover.

Schulte said that the west-central part of the state was suffering from lack of moisture at the time of the May 5 tour report, but some fields were recovering after receiving some rain.

In central Oklahoma, he said that, overall, the crop looks pretty healthy, but does have freeze damage from the April 15 freeze event. In the northeast, the crop received heavy rains this spring, and at the time of the tour, the crop was in good shape. Since the tour, Schulte said that more wheat has headed out, but due to more rainfall, some of the crop is laying down and waterlogged.

Southwest Oklahoma wheat is reported to be in rough shape after getting hit hard by the mid-April freeze, and in just about all counties, hay and graze acres increased. In south-central Oklahoma, the wheat did have good potential until the April 15 freeze. He said yields for this area have been hard to gauge because many of the fields looked good after the freeze, but in the past two weeks, the damage is beginning to show as heads have turned white.

The final Oklahoma yield on average of the nine districts scouted was projected at 33.16 bpa, with total production of 96.534 million bushels. This is below the 2019 production of 110 million bushels with an average yield of 40 bpa and below the data from the May 12 USDA report of 38 bpa, which was as of May 1. Schulte noted that some of the state agronomists feel that production will be more in the 85-million-to-90-million-bushel range.

Average yield estimates for the combined two days of estimates is 42 bpa, compared to the most recent USDA estimates of 47 bpa. 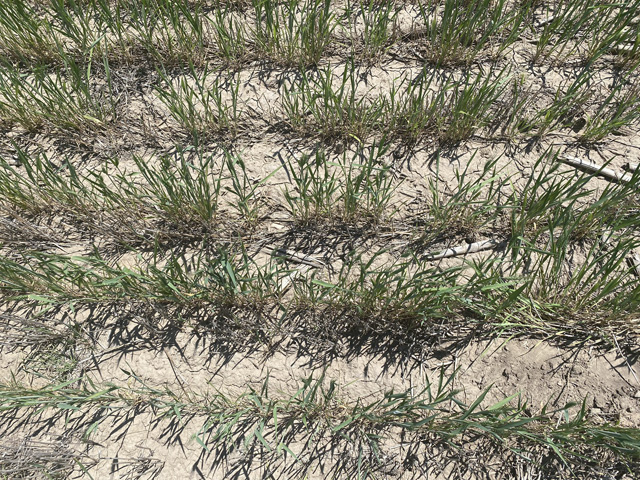