OMAHA (DTN) -- The world keeps changing when it comes to applying nitrogen to corn acres. More extreme weather events, changing nitrogen uptake by today's corn hybrids and farmers wanting to know how much nitrogen is still available for their plants are increasing the popularity of nitrogen monitoring tools.

Several different systems are available, but essentially they are built the same. The user inputs field-specific data, such as cultural practices, soil types, etc. The systems with agronomic nitrogen cycles and historical weather data behind them then estimate how much nitrogen is currently available and could be available in different weather scenarios.

One is the increase in extreme weather events accompanied by large amounts of rain. The second is the changes in nitrogen uptake in today's modern corn hybrids. Newer hybrids take up nitrogen later in the growing season than older hybrids did decades ago, he said.

"In the past, we believed after tasseling there was little need of nutrients," Clover said. "Today we know there is much nitrogen uptake past tasseling with the plant staying green longer."

Encirca services has a suite of tools to help growers monitor and manage their nitrogen levels and prescriptions based on statistical and agronomic models. In addition to nitrogen management, Encirca services also helps growers manage soil fertility levels and applications, variable rate seeding and data analysis, he said.

These Decision Zones are based on advanced soil classifications backed by soil data from USDA and the University of Missouri. Paired with forecast and historical weather data from DTN/The Progressive Farmer, Decision Zones offer the grower increased precision when it comes to their soil productivity and managing input applications such as nitrogen.

Nitrogen modeling also helps farmers to determine soil nitrogen at the present time in relation to crop growth. Simulations can show how much nitrogen is present in the soil after such weather events as a 5-inch rain in mid-June, he said.

"All of this comes together to help growers make better decisions," Clover said.

Much like Encirca, the Climate Fieldview is another field data management service that covers the analysis of corn production and other crops; it includes field health and crop performance analysis. Among the areas focused on is nitrogen monitoring.

Luke Samuel, commercial product director for The Climate Corporation, said users can input soil data, add how much nitrogen has already been applied, and Fieldview can give them a range of nitrogen left in the soil in different weather-based situations. The system allows users to stay on top of changing conditions that affect nitrogen availability in their fields, he said.

Samuel said Fieldview is trained on "a ton" of research and development, from nearly 40,000 acres of climate research farm studies to 30 years of historical weather data and other crucial data points. Farmers can also input their own management practices and unique field data to help provide science-based predictions on how much nitrogen is available.

Samuel said while data-driven digital tools are still relatively new, farmers have embraced the new technology. The company's platform is used on more than 100 million crop acres with 35 million acres paying for the premium features, including nitrogen monitoring, he said.

Adapt-N is another nitrogen modeling tool with a slightly different view.

Originally developed in the early 2000s by Cornell University, the product uses simulation models to determine the impact of early season weather on the nitrogen dynamics in a field. After many years of testing and improvements, it was first made available commercially in 2014 with Agronomic Technology Corp. being formed.

Greg Levow, president and COO of Agronomic Technology Corp, said his product helps growers improve their financial and environmental performance with integrated software, science and data. Adapt-N is built on more than a decade of university research and has also been validated through continuous, multi-regional, replicated strip trials on commercial farms starting in 2008.

"One thing that separates us from others is we are not a supply company and we have unbiased nitrogen recommendations," Levow told DTN.

Adapt-N works mainly with agronomists and retailers, but also has some farmer customers. Levow said one thing they hear a lot from their customers is they don't want to have to enter data multiple times. They will even customize different aspects for customers.

Another feature of the system is the capability to factor in manure and irrigation analysis.

Levow said farmers have seen an average profit increase of $30 per acre. The magnitude of cost savings or yield improvement varies significantly based on weather conditions, field characteristics and management practices, he explained.

While obviously it is important for farmers to monitor nitrogen, another aspect of this technology is the environmental impact of over-applying nitrogen. Reducing nutrients lost to the environment means fewer negative effects on areas such as the Mississippi Delta.

Nitrogen modeling can help farmers become even more sustainable than they already are, Clover said.

"We increased nitrogen efficiency for those farmers in that study," he said.

Levow said Adapt-N can help farmers improve the financial performance of their nitrogen applications, while also reducing the amount of their nutrients that end up in the environment. The monitoring aspect of the system can also alert farmers to opportunities where additional nitrogen may result in a yield increase.

"I think tools like this can also help head off potential future regulatory limits on nitrogen applications," Levow said.

Samuel said farmers are the best stewards of the land. Nitrogen monitoring tools allow them to be that much more accurate when applying nitrogen, he noted.

Despite the increasing popularity of nitrogen modeling tools, some believe testing for nitrogen in soil and plant tissues are more accurate than the modeling systems.

Brittany Bolte, an agronomist at Rock County Agronomy Service located in Bassett, Nebraska, said she has used nitrogen estimation models in the past, specifically the Adapt-N.

While useful, she said it still comes down to the cold, hard truth of soil and tissue results.

Bolte said she likes Adapt-N because she can input irrigation totals. "Nitrogen modeling is a half shot in the dark, as there's no way they know exactly how each soil reacts or doesn't react to rain, mineralization, irrigation, prior history, etc."

Bolte said that, in the future, the estimation models will get closer to the actual amount of nitrogen in the soil, but now there are too many variables in each soil type to even begin to get good, useable numbers.

They are a good general-idea tool, but it doesn't narrow it down enough yet, she said.

Editor's note: DTN/The Progressive Farmer is in a partnership with DuPont Pioneer to provide weather data and other content for use in its Encirca product. 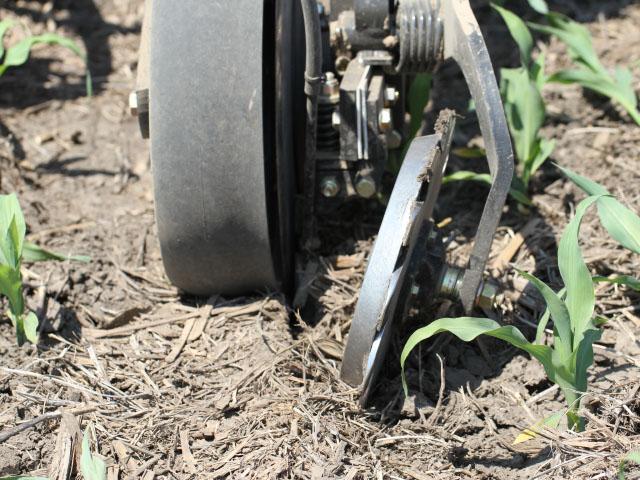