OMAHA (DTN) -- The states of Arkansas and Missouri both took action Friday to ban the use of dicamba-mix herbicide applications in their respective states after waves of complaints from farmers who were not using the technology.

The Arkansas Legislative Council executive subcommittee on Friday chose to take no action on a vote by the state plant board to ban the use of any dicamba-mix herbicide in the state, which basically means Arkansas will ban the use of dicamba for at least 120 days.

Just hours later, Missouri Department of Agriculture Director Chris Chinn issued a temporary stop sale, use or removal order on all herbicides that contain dicamba. The Missouri ban is considered "temporary," said a spokeswoman for the state agriculture department "until a solution is reached."

Arkansas has been at the heart of the battle over dicamba misuse or volatilization and drift to off-target crops. Just under 600 complaints have been filed with the Arkansas State Plant Board, which initially recommended a ban on the sale and use of dicamba on June 23. (http://www.aad.arkansas.gov/…)

The Arkansas plant board's recommendation was sent to a joint legislative Agriculture Committee, which held a hearing Friday morning then voted by voice vote to approve the plant board's recommendation. That kicked the decision up to the Arkansas Legislative Council executive committee, which met Friday afternoon and chose not to take an action. That essentially allowed a ban to go into effect.

The Arkansas ban goes into effect for 120 days starting at 12:01 a.m., July 11. That suggests there could be a lot of dicamba spraying across the state this weekend and on Monday.

Arkansas already has bans on certain formulations of dicamba and limits the use of others. For instance, Monsanto's XtendiMax can only be used before April 15. BASF's Engenia herbicide was the only approved dicamba formulation allowed for use on Arkansas crops after April 15.

Missouri allowed a broader use of dicamba products, but XtendiMax, Engenia and FeXapan were all cited as products included in the ban. Missouri retailers and pesticide applicators are advised not to sell or use any of those products.

"With only a small window left for application in this growing season, I understand the critical need to resolve this issue," Chinn said. "I look forward to working with our farmers, researchers and industry partners to find an immediate solution."

Arkansas farmers planted about 3.1 million acres of soybeans this year. It's estimated that roughly 1.5 million acres were Monsanto dicamba-resistant seeds.

Monsanto issued a statement in response to the Arkansas ban on Friday, stating that while the company is concerned about the reports of potential crop injury, the decision to ban dicamba is "premature."

"We sympathize with any farmers experiencing crop injury, but the decision to ban dicamba in Arkansas was premature since the causes of any crop injury have not been fully investigated," Monsanto said in its statement. "While we do not sell dicamba products in Arkansas, we are concerned this abrupt decision in the middle of a growing season will negatively impact many farmers in Arkansas.

"In the many states we do sell dicamba, we will continue our efforts to help farmers use dicamba successfully."

Monsanto's full statement on the Arkansas ban can be found at https://monsanto.com/…

Tom Burnham, who farmers near Blytheville, Arkansas, and attended Friday's hearing in Little Rock, told DTN afterward that the ban will help this summer, but the problems are more long-term.

"If it goes into 2018 and forward, essentially if this trait is out there with this technology and herbicides, essentially you cannot grow any other type of soybean successfully around it," Burnham said. "Even if you get past soybeans, you've got vegetable farming, melons, peanuts, and there are a litany of problems."

Burnham quoted a scientist who testified Friday describing the problem as "chemically trespassing."

Missouri has received more than 130 dicamba-related complaints this year, and there have been issues reported in multiple other states as well. Scientists report it generally takes as long as three weeks after a spray application to determine if there was extensive off-target drift.

Larry Steckel, a weed specialist at the University of Tennessee, told DTN in a phone interview on Thursday that checking dicamba damage in the state has become a full-time job. Steckel mainly is seeing and hearing about the problems with drift and volatility, but he has had some phone conversations with farmers who were able to perfectly follow the label on the approved products. It's akin to threading a needle, he said.

"It's just, boy, that label is tough to follow. You can't spray when there is too much wind, and I think we're finding that these temperature inversions are a real issue with this movement. And if there is anything under 3 mph, you can't spray it either," Steckel said. "If you have a lot of acres to spray, that is hard to do. So, on paper, you can make this thing work, but in reality, if you are typical famer, it's a major undertaking trying to get it to work."

Steckel said fields that were hit multiple times with dicamba drift last year saw yield declines anywhere from 30% to 50%. "We're starting to see some of that again. The folks who have been drifted on once are really nervous about getting drifted on again."

As DTN has noted, pesticide drift is not an insurable loss for farmers. The Federal Crop Insurance Act only covers losses for drought, flood or other natural disasters. The Risk Management Agency has made some changes allowing farmers to elect to exclude yields on fields hit with uninsurable losses from their Actual Production History so it would not affect the coverage levels in subsequent years. 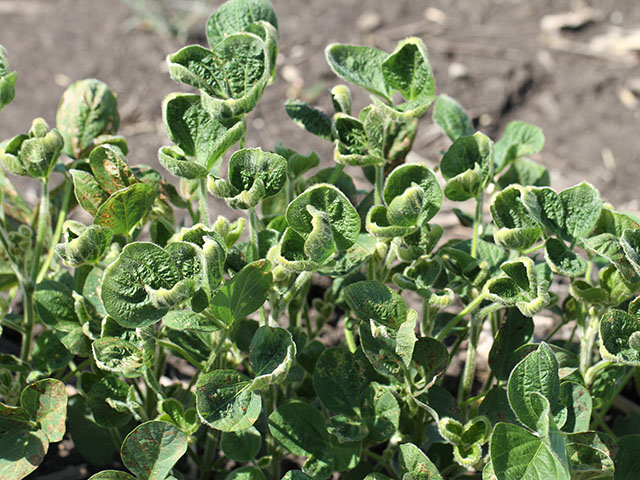