FORT LAUDERDALE, Fla. (DTN) -- Fertilizer regulations continue to be a burden for Europe's retailers and farmers as the general public there looks at fertilizer as a bad thing, according to one European fertilizer insider. Some European farmers have moved toward organic crop production because of this situation.

Pierre-Francois Dumas, independent consultant and former general secretary of the European Independent Fertilizer Blenders and Distributors, said fertilizer is a changing industry with many challenges facing it. He spoke last month at the 2016 Fertilizer Outlook and Technology Conference held in Fort Lauderdale, Florida.

Europe presently uses about 16.7 million metric tons (mmt) of fertilizer annually. Of that total, 68% of Europe's fertilizer is in the form of nitrogen, 17% is in potash and 15% is phosphorus. Europe imports about 29% of nitrogen needs, 60% of the phosphorus and 62% of its potash needs.

The increasing amount of regulations on using and storing fertilizer has had a detrimental effect on the industry there. Adding to the complications is every European country has its own set of regulations regarding fertilizer, and they differ, he said. This includes regulations concerning the environment (air, water and soil), security and business practices.

Dumas, from France, said his country's regulations don't allow nitrogen to be applied from late summer through the fall.

The use and storage of anhydrous ammonia in Europe has almost been eliminated thanks to these types of regulations, Dumas said. France is the last country to be able to use anhydrous ammonia, and the regulations are so restrictive that farmers can't apply the nitrogen fertilizer anywhere near public roads.

"I see a day soon that the end of ammonia use in France will happen," he predicted.

Companies that have fertilizer to sell must prove to the different countries that their products are safe. The downside is this type of regulation is preventing many new products from being imported in Europe, he said.

Many French farmers have decided to shift to organic crop production, because fertilizer regulations are so stringent and this gives them a better chance to earn an income, he said. Roughly 6% of the French crop production is now organic, up from almost nothing in recent years.

This organic shift has helped some farmers survive, especially those close to larger population areas. The downside to moving toward organic crops, however, is not every customer can afford the higher price of organic crops, he said.

Despite the many hoops European farmers and retailers have to jump through to use and store fertilizer, Dumas is optimistic that new technologies will be allowed in Europe as these products can help farmers become more efficient in raising crops.

Among the technologies he listed were coated urea, blended N, P and K and coated fertilizer with yeast or other bacteria. Coated urea would not be subject to many of the storage regulations, and many in the European fertilizer industry are pushing hard for this product, he said. Coating fertilizer with yeast is for nitrogen fertilizer, and bacteria is mainly for phosphorus to be applied to the soil.

"These are the next steps for our fertilizer industry," Dumas said.

Blended N, P and K already make up anywhere from 20% to 50% of the market in Europe and keeps increasing every year. Farmers want to become more efficient and larger farmers are monitoring this situation closely, he said.

Farmers need to feed the world's growing population, and the use of fertilizer is vital for increasing yields. Dumas said the European fertilizer industry has to do a better job of educating the general public that fertilizer is not bad; the majority of people already believe the opposite.

Many people want healthy products but don't want to pay a lot for these products. One example is that Europeans want cheap food products and gas and oil products, but genetically modified foods and shale gas production are "massively" rejected in Europe, he said.

The only country in Europe that allows GMO crops to be grown is Spain. 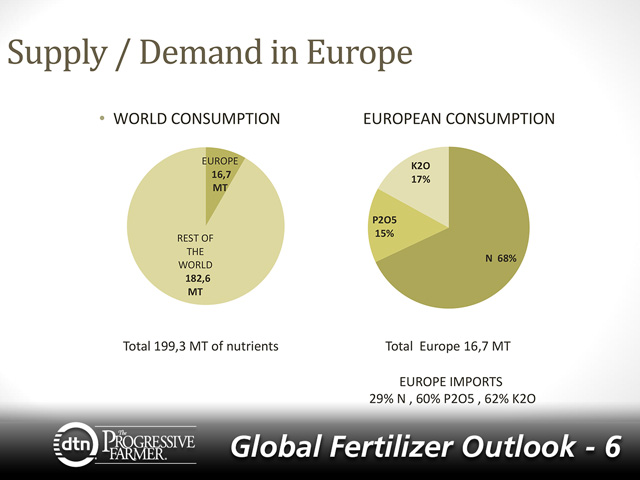