OMAHA (DTN) -- For some reason, I have always been fascinated by vintage farm buildings.

I suppose being raised on a farm with these buildings might be the main reason. We took our kids to the Living History Farm in Des Moines, Iowa, a few years back and the early 1900s farm set-up was essentially the same farm place I grew up on. Well, without electricity. And with horses.

Each building had a specific role on the farm. The larger buildings were usually a livestock/hay barn and a corn crib which housed grain. Many Midwest farms usually had smaller buildings such as chicken, milk, cob and wash houses.

Or maybe it's because I would listen to stories of my dad growing up with the corn crib on my grandparent's farm. This large building, ordered out of a catalog in the early 1900s by my great grandpa, had a built-in cup elevator system in the floor with several overhead bins.

The corn crib on the farm I grew up on was a bit more basic without a built-in elevator and no overhead storage. Our building had the entire east side available to store ear corn and the west side had four bins, two larger bins in the corners and two smaller bins in the middle along the west wall.

He stored soybeans in the corner bins of the west side and shelled corn in the east side. The smaller bins stored oats when he would occasionally grow that crop.

If the corn came out of the field wet at harvest, it would go to the metal grain bin first, get dried down and then be moved to the corn crib. He had both a wide and a narrow Kelly Ryan elevator. The wide one would go under the unloading auger of the grain bin, he would fill the truck, drive it over the corn crib and unload into the crib via the narrow elevator.

The wide elevator was apparently newer and had a PTO shaft, but the narrow elevator was still run by a belt pulley in my youth. The only tractor we had with the ability to run the belt was our 1957 John Deere 620 and one harvest the tractor had issues, so we had to borrow a neighbor's John Deere 60.

Shortly after, a PTO shaft was put on the elevator so any of our tractors could run the narrow elevator.

The upstairs of the corn crib only ran about halfway as the north side was open to the roof. To get to the corners of the bins on that side of the building, you had to walk on the edge of the bins over the open area.

Dad would use pieces of tin to funnel the grain to the different bins upstairs in the crib. There were a few, long wooden planks over the open side to walk across on to attach the tin to the end of the elevator.

Once I really started to help him as I became a teenager among my least favorite jobs was to attach the tin to the end of the elevator. I didn't think I had a fear of heights, but after doing this task a few times I REALLY didn't look forward to doing this in the fall.

During a summer thunderstorm, a large tree branch fell on the narrow elevator and severely bent it, so it was retired. After this the wide elevator or even the auger was used in the corn crib.

When we moved to the farm we are currently at, there was old corn crib. It was, however, in such dilapidated shape, as was the old farmhouse, that we decided to tear the buildings down, so we never stored any grain in the crib.

The wide elevator sat in the trees for many years before my dad decided he need a decent feed bunk for the cows and so he reused it for this purpose.

Driving through the country, I see old corn cribs on farms every once in a while. Sometimes they are even still being used by the farmer to store some grain, despite being many decades old.

While I'm a little sad we don't store any grain in a corn crib anymore, the bigger emotions for me are happiness and relief I don't have climb to the top of it and attach tin to the end of an elevator. 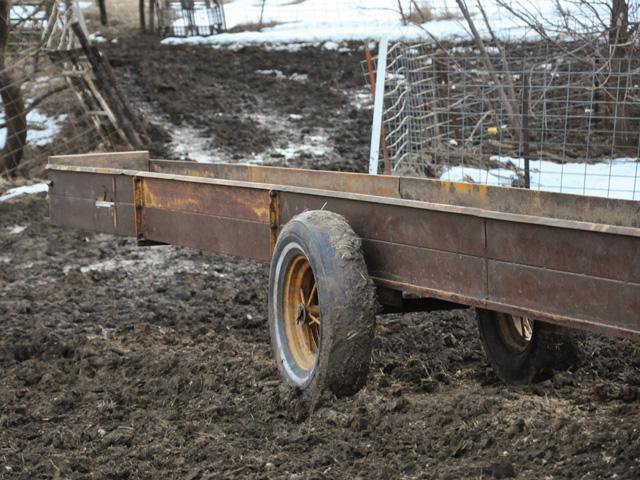