Spring planting is coming right along in most places of the Corn Belt, minus the recent rains. Most of the corn is in the ground and growing while some of the soybeans are already planted.

My colleague, Matthew Wilde, traveled across central Iowa in early May and found a farmer, Eric Stall of Ankeny, Iowa, planting soybeans with a vintage 1960s John Deere 2510 and an eight-row planter (watch the video at https://twitter.com/…). The farmer told him he farmed the family's 160-acre farm while working for other local farmers and it was a "privilege" for him to farm the land with vintage equipment.

Now, when you drive the countryside today, most of the tractors you see working in the field are fairly newer tractors. These would be tractors that have all of the technology of 2021 and planters with many rows behind the tractor.

However, every once in a while you come across someone working to plant a crop with a decades-old tractor like this gentleman in Iowa. On our farm we plant with a 1968 John Deere 4020 tractor.

We have a neighbor who plants with a 1960s International 656. I believe they have an IH Farmall H and an M but I haven't seen those tractors work in the field in recent years. They used to have a mounted corn picker when on the M, and a pull-type IH combine, but I have not seen this equipment in many years.

They used to plant with the M on a four-row IH planter. When I see an IH Farmall M on a four-row planter, I think of my own grandpa. For more than 20 years from the mid-1940s to the late-1960s, this was first his tillage tractor and then later his planter tractor.

As I have written before, he bought the M at about the end of World War II, thanks to his brother owning a sandpit business in our area. Great-uncle Ed bought the tractor (which was painted industrial yellow since it was going to a non-ag business), then he sold it to my grandpa who drove it home from the railyards in downtown Omaha and painted it the familiar red color.

At least this is the story my dad's oldest brother tells. He said he remembers helping my grandpa paint the M, the only new tractor my grandpa ever purchased, when he was about 10 years old.

Throughout the 1950s, he prepared the eastern Nebraska soil with the M and then planted with a 1940s John Deere B. Additional equipment for the M included a loader and a mounted corn picker.

Then, in 1960, he traded in the B to one of the local John Deere dealers and bought a three-year-old John Deere 620, which we still have today. The 620 became his "big" tractor and the M then become his planter tractor.

For the last few years before he retired, the Farmall M and John Deere 620 were his main two tractors on his small dairy farm. I'm not sure if he ever had an International planter, but I know he had a John Deere two-row lister, which we still have and use to plant sweet corn every once in a while.

Then in the 1960s with my dad and uncle helping more, they bought various four-row John Deere planters. I don't remember what numbers they had, but by the time I came along and remember them planting with a couple 494A planters and then a 1240 John Deere planter.

My grandpa let his two sons take over the farm in 1968 after some health issues and among the first things they did was to trade the old M in for a John Deere 730, their first diesel tractor. The M was traded at a local dealership and was in our area for a few years before it was sold at a farm equipment auction. This is the end of the line for me tracking the tractor as someone from outside of the area must have purchased it at the auction in the late 1970s.

While it is a bit of a long shot, if you own a mid-1940s Farmall M and you think it came from a farm equipment auction near Kennard, Nebraska, in the late 1970s, please contact me. I would really love to locate and purchase this family tractor.

A big shout out to Eric Stall and all of those farmers still planting crops with vintage iron! 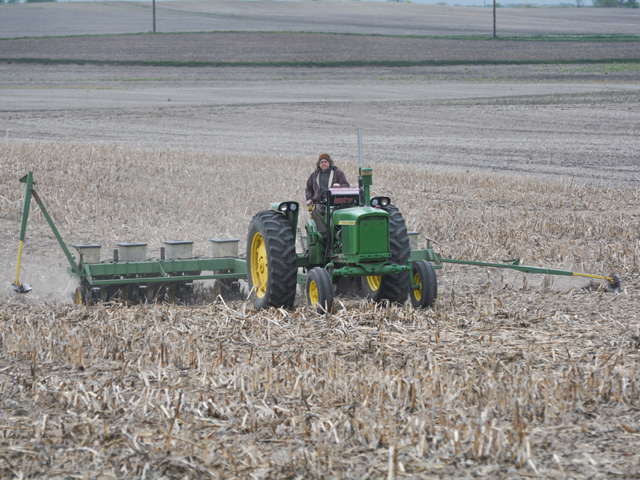