We had a pretty good snowfall in eastern Nebraska and western Iowa a couple weeks ago. Mother Nature "blessed us" with 10 to 15 inches of snow, the most snow we have seen at one time in more than a decade.

It was probably our time for a heavy snowfall. If anything, we were overdue for an event like this.

I was busy pushing snow for a couple hours the next afternoon. We have a quarter-mile lane, the farm place and area we store our hay bales in for our cow/calf herd from which I remove snow.

As I was doing this, I got to thinking about how previous generations of farmers completed the chore of moving snow. I wondered what interesting implements they used to clear their lanes.

One of the stories my dad always tells from his childhood was using a pull-type road scraper with his dad and a John Deere A. This was among his first tractor driving jobs with my grandpa standing on the scraper, operating the controls.

They did this several times a year. This outfit worked in the winter months to move snow and again during the rest of the year to knock the ruts down on their lane after a rain.

Luckily my grandparents had seven children and three were boys. I'm guessing my grandpa always had a willing tractor operator to help him.

My grandpa bought a new International Farmall M after World War II and several implements to go along with it, including a loader. Perhaps he used this combo to push snow as well.

I know a popular option with loaders at this time was to remove the bucket and put on a snow blade. I'm sure people probably could have left the bucket on and used this to move snow.

There were other snow removing implements as well. I have seen Ford tractors (8N, 2N, 9N) with front mounted blades which I assume run off the three-point under the tractor somehow.

I have also seen some sort of pull-type implement with a wheel on the back with a blade in the middle. I don't know what you call this thing, but it must have mounted to a tractor, allowing the blade to push snow and/or soil.

My dad would remove snow with his 1967 John Deere 4020 with an add-on cab, a 148 loader and some sort of little red blade. He would go into town and clear several driveways and even the local nursing home's parking lot for many years.

That blade was not a very heavy blade and I can remember it breaking several times. So probably in the mid-1980s, after he had welded it multiple times, he took the time to paint up the blade after fixing it and he sold it.

For some time, he just went without a blade. One of our neighbors had a farm equipment auction probably in the early 1990s and my dad bought a Hampton blade, which was considerably heavier.

Hampton Farm Equipment was a small, regional farm equipment manufacturer from Kennard, Nebraska, not too far from where I live. We had a Hampton manure spreader for several years as well.

Another regional farm equipment company, Kelly Ryan Equipment Company, is just up Highway 30 in Blair, Nebraska, and makes various equipment, such feed wagons and manure spreaders. I would venture to guess there was some connection between these two companies considering how close they were to each other.

This old Hampton blade is what I still use today to push snow from our place. Most years I put it on our 4440, but this fall it was already on our "other" 4020, which has a Hiniker cab, so I'm using this rig to clear snow this winter.

I would be curious to hear some of your stories of how you or maybe previous generations pushed snow decades ago. Please drop me a line with your vintage snow removing equipment tales. 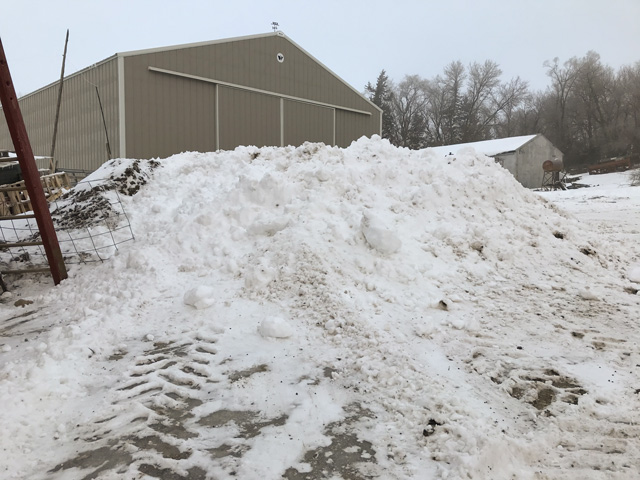