Barge freight and secondary rail freight costs have moved higher in the past week as demand is spiking due to the rise in cash grain prices.

"Mississippi Gulf grain inspections totaled 0.788 million metric tons, up 33% from the previous week, and 22% above last year, due primarily to higher wheat and corn inspections," according to the USDA Grain Transportation Report for the week ended June 2.

In the past 10 days, barge freight has seen a 50% hike in some corridors and a 35% to 60% hike in others for the last two weeks of June placements.

Since June 1, the corn cash price has increased 18 cents, according to the DTN Cash Index as of June 10, and the soybean cash price has jumped 97 cents. And this was on TOP of the rallies we saw in May.

For the week ending June 10, soybean futures gained 46 1/4 cents in the front-month July contract and 77 1/2 cents in the November contract, extending the streak of gains to nine weeks. This rally in soybeans is the longest in more than 40 years.

The higher corn and soybean futures have inspired farmer selling, which is creating a demand for barges on all river segments. Demand for old-crop winter wheat to Brazil out of the Gulf has been steady, as well. On June 8, the middle of last week, Ceres Barge, LLC, reported the market was up on old and new crop barges"as the higher board generated a huge grain movement on almost all river segments. The June/July slots are getting booked up quickly. As of Friday, there were some higher values in various slots, mainly July."

New-crop barge freight has jumped at least 50% to 60% as both the soybean and corn new crops are so far in good condition and are on pace for a large harvest in the fall.

Barges in some corridors are also being sold with "terms," which means shippers need to load barges and release within "free time" or face penalties. This is due to the fact that barge freight is higher in the coming months versus freight costs for June/July. Extra penalties on top of demurrage will discourage shippers from buying cheaper nearby freight and holding it. For example, freight in St. Louis corridor is 225% over tariff for June versus 475% in September and 550% in October. All corridors have similar differences in nearby freight costs versus deferred.

The cost for new-crop secondary rail shuttles rose late last week as high as $1,000 per car over tariff for first-half October and $1,400 for second half. As of June 9, costs were at $800 for first half and $1,500 for last-half October. Freight for June also rose the past week with first-half June at $50 per car and last half at $200 per car. One week ago, June was trading at negative numbers.

One thing to remember is that railroads parked locomotives -- otherwise known as "power" -- and furloughed workers in the past six months due to lack of grain movement. A BNSF worker in the Northtown yard in Minnesota told me there are orders to start returning power to service, and BNSF shuttle loaders in eastern North Dakota mentioned they expect parked shuttles to be back in service by harvest.

It's no secret the U.S. is looking at a large crop of wheat this summer and early fall. The first wheat crops, hard red and soft red winter, are starting to come off the fields in the south and harvest will head north into July. Yields are expected to be near records in some areas, and USDA on Friday confirmed it in the June WADSE report. "Projected production for 2016/17 is up 79 million bushels mainly on improved prospects for the hard red winter wheat crop in the Great Plains following excellent growing conditions throughout the spring months. Consequently, the winter wheat yield is forecast to be record high," according to the report.

Tim Luken, manager at Oahe Grain in Onida, South Dakota, is serviced by the Rapid City, Pierre and Eastern (RCPE), a Class II railroad operating across South Dakota and southern Minnesota with portions of the railroad extending into Wyoming, and Nebraska and is serviced by the Canadian Pacific (CP). Luken told me the tariff rate at Onida "went down about 4 cents a bushel over Chicago and more going to Minneapolis and even south to destinations via the Union Pacific (UP). Since the UP has lowered their wheat rates, the CP figured out they better follow suit or risk losing business."

Luken said the "RCPE actually received a better rate from the UP being the RCPE could originate in Mankato where UP has their yard and being the RCPE does have trackage rights from Tracy to Mankato or not. I am assuming this is the reason CP did what they did. So any rate decrease gets passed on to the producer. RCPE has been very aggressive on getting better rates for us and are very good to work with."

That's good news for Luken since he has told me more than once that his winter wheat crop is the "best I have seen in years and hoping for quality because there will be quantity." So, lower wheat rates means better margins for his elevator and better savings to his producers.

"This crop is going to have to move someplace, and elevators will be the first stop saving what little room they have on farm storage," said Luken. "I feel farm storage is still 40%-45% full of off-quality grain not wanting to go anywhere because of discounts and hoping for good quality this year to get rid of some of the off-quality grain still on farm."

He told me his producers have been locking in new-crop contracts not only for new crop coming off field delivery, but also deferred months October, November and December. "The carry in the market is telling them that, and I have also been steering them in that direction to do so." On June 10, the carry from the July contract to the September was at 17 cents, and the carry from the September contract to December was at 42 cents.

Protein content will be "the number-one big question around here and where the mills will set their levels," Luken said. "Mills have not had to change their grind for many years, and this may be a year they have to from a 12 pro to maybe an 11.8 pro level. If we do not see a 12 protein crop, average basis will have to do the work. Time will tell."

In the past few weeks, flour mills and resellers (Gulf exporters) have been paying up for 12% protein old-crop winter wheat, fearing that the new crop may not make an average of 12% protein this year due to the cooler, wet growing conditions last month. U.S. Wheat Associates reported June 8 that harvest is 27% complete in Texas and 28% complete in Oklahoma.

"Kansas is just now starting to get into full swing with less than 1% harvested," USW said. "Harvesting is underway from central Texas to southern Kansas and continues to move north and west very quickly and should continue to do so if the warm, dry weather continues." USW said that while test weight and yields are very good so far, average protein seen is 11%."

It's still too early to tell, but we could see the discounts widen below 12% if protein levels don't come up. 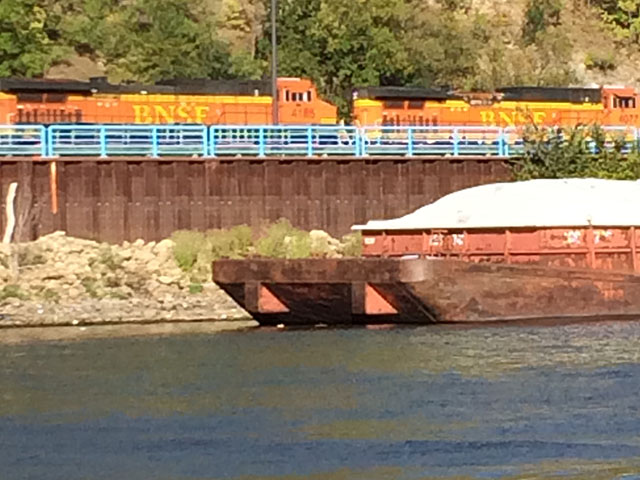