Gasoline: RBOB gasoline futures market closed 1.10cts higher at $1.6240. RBOB gasoline remains in a secondary (intermediate-term) sideways trend between roughly $1.75 and $1.43. Weekly stochastics are neutral-to-bullish indicating a possible test of the high side of this range.

Ethanol: The spot-month contract closed 6.8cts lower at $1.507. The market's secondary (intermediate-term) trend remains sideways with support at the double-bottom low near $1.43. Resistance is at $1.632. Weekly stochastics are neutral.

Natural Gas: The spot-month contract closed 9.0cts lower at $2.893. The secondary (intermediate-term) trend remains down with initial support at the 4-week low of $2.753. Below that support remains at $2.521, a price that marks the 61.8% retracement level of the previous uptrend from $1.611 through the high of $3.994. Weekly stochastics are near the oversold level of 20%.

Propane (Conway cash price): Conway propane closed 0.88ct lower at $0.7375. Cash propane's secondary (intermediate-term) uptrend looks to be nearing its end. The market is testing resistance between $0.7188 and $0.7838, prices that mark the 50% and 67% retracement levels of the previous downtrend from $0.9100 through the low of $0.5275. Weekly stochastics are above the overbought level of 80% and in position for a bearish crossover. 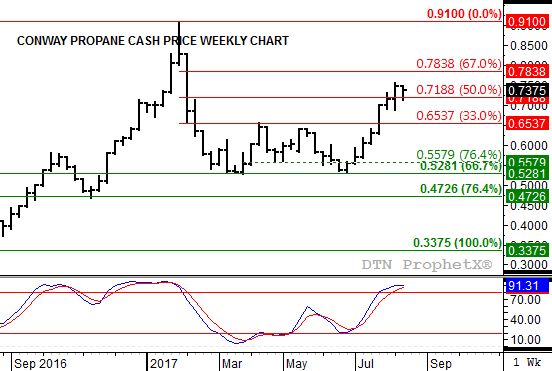