Live Cattle: The more active December contract closed $1.200 lower at $106.85. Despite the lower close the market still looks to be in a secondary (intermediate-term) trend uptrend. Initial resistance is at $111.95, a price that marks the 23.6% retracement level of the previous downtrend from $146.55 through the contract low of $101.275.

Feeder Cattle: The October contract closed $0.575 lower at $132.375. The contract continues to consolidate between its 4-week low of $126.975 and the last week's high of $134.175. Last week's bearish outside range could lead to continued selling this coming week.

Lean hogs: The more active December contract closed $1.05 lower at $48.90 last week. Dec hogs extended its secondary downtrend by moving to a new contract low of $47.625. This was also a new long-term low, extending the market's major downtrend. However, weekly stochastics are in single-digits indicating a sharply oversold situation.

Soybean meal: The December contract closed $10.00 lower at $302.80. The contract looks to have reestablished its downtrend with a move to a new 4-week low of $301.50 and closing below support at $303.00. Major (long-term) support is at $299.90 on the monthly chart. However, weekly stochastics are in single-digits indicating a sharply oversold situation. 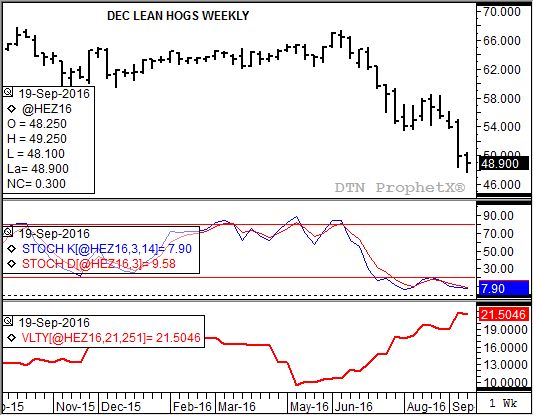