DECATUR, Ill. (DTN) -- Peel back a few husks if you live in western bean cutworm country.

A fair number of the ugly critters were found feeding deep into the ear on the ProFarmer Crop Tour during the last few days of August. The kernel damage they cause can open the ear up to molds and storage quality problems, and Bt proteins may not keep your corn safe this year.

Ear tip feeding was the most obvious, but tour scouts also found cutworms toward the butt of the ear. Although it's too late to do rescue sprays for the western bean cutworm, knowing which fields are infested should influence harvest decisions.

Extension entomologists in Indiana, Michigan, Ohio and Pennsylvania have all issued western bean cutworm warnings this fall. Michigan State University entomologist Christina Difonzo said in her alert that damage is being found in Bt and non-Bt corn hybrids.

Understanding which traits are meant to control WBC is important. Bt proteins that kill European cornborer do not give 100% control western bean cutworm, Difonzo reminded readers in her recent bulletin.

"Cry1Ab (Yieldgard) and Cry1A.105 plus Cry2Ab2 (Double Pro) are not effective," Difonzo reported. "Cry1F is listed as giving western bean cutworm control, but it is having a tough time this year -- many Cry1F hybrids are being chewed on, especially in southern Michigan. It is my opinion that it only provides suppression."

The Cry1F protein is known as Herculex 1 and is part of Herculex Xtra. The Herculex trait is found in most Acremax (AM), Instrasect and TRIsect packages. It's also the above-ground component in Smartstax and Agrisure E-Z Refuge corn hybrids.

Because the Bt protein must be ingested by the larvae before it dies, minor damage on the ear of Bt-expressing hybrids has long been common. This light feeding usually produces light scarring or scraping on the tops of kernels. The type of feeding being found this year is much more severe, and larvae are not dying.

The Vip3A trait (found in some Agrisure hybrids and AcreMax Leptra) is a Bt protein targeting secondary caterpillars, and it should still be effective against western bean cutworms, Difonzo said.

The Western Bean Cutworm is a native of North America that has recently expanded its range eastward from the Great Plains region. After its initial discovery in southeastern Iowa in 2004, it was found in western Illinois and in northwestern Indiana in 2006.

Although primarily known a pest of field corn in many areas, WBC's broad host range also includes legumes (but not soybeans.) It can be a pest of dryland beans where they are grown in abundance. Unlike other cutworm species, it feeds on the reproductive parts of the plants and not by cutting stems. The western bean cutworm is a late-season pest and its feeding can cause both yield loss and degrade quality of grain

Here are some tips from Difonzo for heavily infested fields:

· Report highly infested Cry1F fields to seed dealers and university entomologists like Difonzo. If you have a Vip3A field with unexpected damage from western bean cutworms, report it immediately as well.

· Run the grain from problem fields over a screen before storing it to remove damaged kernels.

· Dry the grain down rapidly to avoid pathogen growth and mycotoxin development.

You can read Difonzo's complete article on the pest here: http://bit.ly/….

Pamela Smith can be reached at pam.smith@dtn.com. 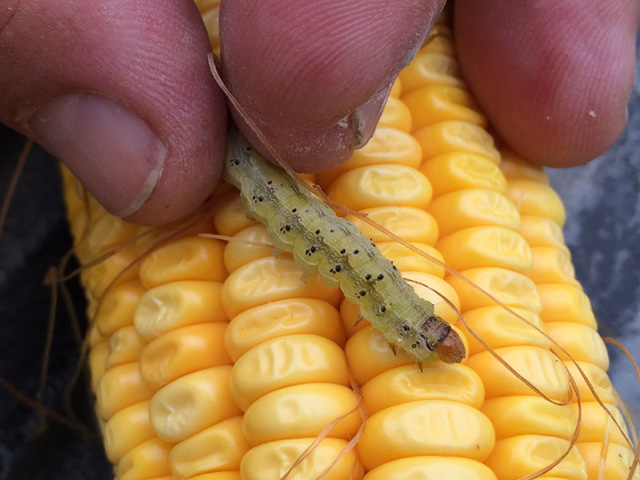