Lower Mississippi River and Lower Ohio River conditions are still very poor. Barge groundings are stopping loaded barges from reaching the Gulf in a timely manner and river terminals are scrambling to stay open as harvest bushels want to move there. However, reduced drafts and temporary closures have caused some river terminals to drop basis levels and to pile soybeans, with social media showing an approximate 500,000-bushel pile of soybeans at a West Memphis plant.

Corbin Catt, President/Owner of Catt & Associates, Kansas City, told DTN that he spoke with a couple of elevators that had sold into St. Louis for export. "The elevators were given the option to reroute grain to various crush facilities, but it is early and financial details are vague. The rerouting of export bushels into the interior may hinder the interior basis as new supply become available."

Soybean and corn basis at river terminals affected by the recent river closures and dropping river levels have slashed their basis to the farmer in the past month. Shippers are facing higher barge freight, reduced drafts and smaller tow sizes from 36 to 25. In the end, the price to the farmer includes all those extra costs and in turn, lower basis.

"One of the well-understood phenomena in agriculture is how the price a farmer receives at point of sale is influenced by how efficient or inefficient the supply chain is after the farmer delivers the soybeans or grain," said Mike Steenhoek, Executive Director of the Soy Transportation Coalition. "If transportation becomes more costly or inefficient, many of those costs will be passed onto farmers in the form of a lower price (i.e. "more negative basis"). In essence, if a barge loading facility along the river is less able to move bushels of soybeans or grain out their back door -- due to less efficient barge transportation -- the facility will be less able to accept bushels via their front door. The barge loading facility will often respond to such a scenario by decreasing the price offered to farmers (i.e. "having a more negative basis") in order to mitigate deliveries to their location."

Steenhoek said he gathered corn and soybean basis bids from a number of farmers on Oct. 10 and 11 who are located near the inland waterway system:

The Ohio River has been a trouble spot for groundings below Olmsted Lock and Dam and down into Mound City and Cairo where it meets the Mississippi River. This is causing some barge lines to reduce drafts to 8'6 and as for the Mississippi River, the Corps has advised drafts of no more than 9' at St. Louis and south.

Tom Russell, Russell Marine Group said "Over the weekend, groundings and stoppages have occurred just south of Memphis at mile 680 and on both the Upper Miss and Ohio Rivers just north of the Cairo junction of those two rivers. Some traffic is moving while Mile 680 on Lower Miss is closed in both directions. Any traffic that is moving elsewhere is very slow and usually in one direction at a time. Overnight Sunday, there was another closing at Mile 748 on the Lower Miss."

Russell said that conditions will continue to deteriorate until precipitation occurs across the board. "Barges will be delayed, and ETAs cannot accurately be pinned down until tows are past the trouble spots and within two days of arrival in Baton Rouge/New Orleans Harbor. Additional tow size and barge drafts reductions are likely in the coming days."

Needless to say, the dredges have been keeping busy running from one trouble spot to the next.

As the Mississippi River's bed is deeper than the Gulf of Mexico's water surface level, there is yearly saltwater intrusion. Saltwater in the Gulf of Mexico is denser than the freshwater flowing in the Mississippi, said Russell. "Therefore, at low river flows, the Gulf's saltwater moves upstream along the bottom of the river underneath less dense river freshwater. With the recent deepening of the channel to 50 feet, it is said that this may cause an increase in the duration and extent of the annual saltwater intrusion. Because saltwater has a greater density than freshwater, it moves upstream in the form of a wedge."

Several factors impact the upstream movement of saltwater from the Gulf. The dominant factor is the volume of flow in the river Russell said. Given the low water, the current is slow heading downriver and thus affecting the flow. Bottom line is that the sill is necessary to protect the freshwater intakes for the City of New Orleans. A sill or mud berm is a barrier placed along the width of a river at a certain point to regulate flow and usually causes a change in the height of the water level.

Russell noted that the Captain of the Port of New Orleans recently issued a series of Vessel Traffic Service (VTS) Safety Measures to protect persons and vessels from the potential safety hazards associated with the U.S. Army Corps of Engineers' construction of the emergency Saltwater Barrier Sill at Lower Mississippi River Mile Marker (MM) 63.8 Above Head of Passes (AHP).

"Regretfully, with the building of this sill, may come a reduced draft. However, this will not be known until construction gets underway. This is a very fluid situation and restrictions could come with very short notice," added Russell.

Here is a link to the USACE news release on the building of the sill: https://www.mvn.usace.army.mil/… 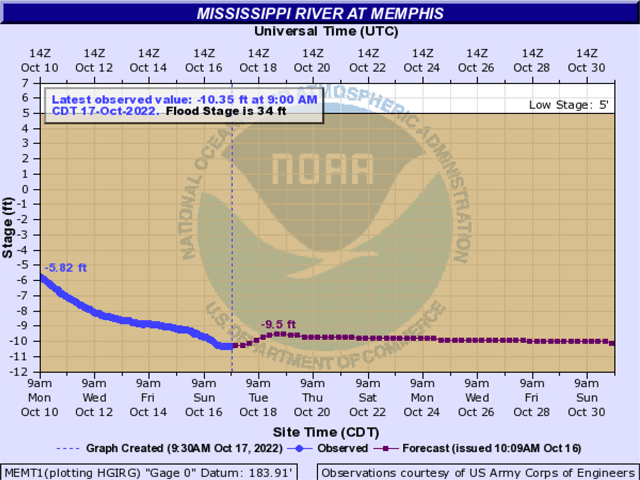