In a joint letter written to President Biden on Feb. 24, 2021, the Specialty Soya & Grains Alliance (SSGA), Agriculture Transportation Coalition and 70 other agriculture associations made an urgent plea, asking for intervention into the container shipping crisis that has severely injured food and other U.S. ag and forestry exports that our international customers are depending on. The letter points out that ocean carriers are enjoying their most profitable period in decades, "charging unprecedented freight rates (and) imposing draconian fees on our exporters and importers," while potentially irreversible damage is being done to the U.S. companies that ship containerized agricultural products.

"One of the great commercial challenges of the ongoing pandemic has been actions of ocean container carriers, including declining to carry our export cargo, severely injuring U.S. agriculture, food and forestry product exporters, preventing us from delivering affordably and dependably to international markets," wrote the ag groups. "This is a crisis: unless the Shipping Act and other tools available to our government are applied promptly, agriculture industries will continue to suffer great financial losses; these carrier practices will render U.S. agriculture noncompetitive for years to come," wrote shippers. https://www2.dtn.com/…

SSGA, which represents exporters of identity-preserved grains, peas, lentils, food-grade soybeans and other agricultural products that move in containers, said in a news release that agricultural exporters' access to international markets is being jeopardized by lack of communication and this unprecedented dysfunction and cost of ocean transportation services, which includes unreasonable and unjust practices, such as the rejection of U.S. agricultural cargo by ocean carriers who are shipping empty containers back overseas to keep up with the high demand for U.S.-bound imported goods.

After struggling through the pandemic-related disruptions that began in March 2020, the situation got much worse in October. Bruce Abbe, SSGA strategic adviser for trade and transportation told DTN that unprecedented import demand and high rates for container shipments from Asia to the West Coast led ocean carriers to begin to avoid handling U.S. exports and to route empty containers directly back to China and other Asian manufacturing centers.

"The import demand is being driven by an explosion in ecommerce and big retailers needing to restock. Instead of the normal two-way haul, carriers became focused on repositioning their empty equipment as quickly as possible back to Asia to take advantage of skyrocketing spot rates. "They started avoiding taking full containers with U.S. agriculture exports and instead preferred to ship air in empties for the lucrative head haul," said Abbe.

"The current imbalance in import and export container flows has gradually developed into a congested system in the U.S. from key West Coast ports, mostly in southern California, and back to inland rail terminals and distribution centers. With so much of the imports coming into LA Long Beach, the Port became clogged, causing backups of ships waiting to unload," added Abbe.

"The West Coast ports took precautions, but COVID-19 has also impacted dock workers, causing a current shortage of labor to meet the ramped-up demand," said Abbe. "Vessel delays and congestion at the ports have meant Midwest exporters have had to grapple with continual last-minute booking cancellations and cargo rolled to later ships, in those cases when they actually can get containers moved to the ports."

It's not just food soybeans and grains that are affected. Abbe said that meat, fruit, vegetable and other perishable food exporters have seen spoilages because their products did not get moved in a timely manner, costing those exporters to lose product and in turn money.

"The ultimate kick in the teeth is when exporters are charged detention and demurrage penalties for problems that ocean carriers and port terminals themselves caused," said Abbe, referring to fees that carriers levy for containers that sit at the ports after free storage time elapses, or for the late return of equipment.

In October 2020, SSGA was among the first of the national agriculture associations to shine a light on the disruption of the food supply chain and other critical problems facing containerized ag exports, reporting that shipments of agricultural products by containers were discontinued by some major shipping lines. In November 2020, agricultural exporters requested official action from the Federal Maritime Commission (FMC) to investigate denied and canceled container bookings among other serious issues still causing them difficulties to ship ag commodities.

On Nov. 19, the FMC approved a supplemental order that expanded the authority of Fact Finding 29, "International Ocean Transportation Supply Chain Engagement." The supplemental order authorized Commissioner Rebecca F. Dye, as the designated fact-finding officer, to investigate ocean carriers operating in alliances and calling the Port of Long Beach, the Port of Los Angeles or the Port of New York and New Jersey. The expanded commission investigation would seek to determine if the policies and practices of those shipping companies related to detention and demurrage, container return and container availability for U.S. export cargoes violate the May 18 final Interpretive Rule on Demurrage and Detention Under the Shipping Act.

In December 2020, FMC Commissioners Carl W. Bentzel and Daniel B. Maffei sent a letter to World Shipping Council President and CEO John Butler, expressing concern about reports that ocean carriers are refusing the carriage of U.S. exports. FreightWaves reported in a Dec. 16 article that Bentzel told them separately that the letter was meant as a "shot across the bow" of the container lines because the number of complaints he was receiving was up to four to five per day.

"We want to stress the point that in responding to import cargo challenges, ocean carriers should not lose sight of their common carriage obligations to provide service to U.S. exporters. We urge vigorous action, consistent within the bounds of existing law and regulation, to protect U.S. exporters. As our ports experience unprecedented cargo surges, it is imperative that we strive for a balanced trade to keep our supply chain fully effective and efficient, while maintaining vital export opportunities for the U.S. agriculture and manufacturing bases," wrote the commissioners.

The Shipping Act specifically codifies the requirements to provide common carriage and ensure shipper access to ocean transportation in section 41104(a)(10): common carriers may not "unreasonably refuse to deal or negotiate," as well as prohibitions against concerted actions in section 41105: two or more common carriers may not "boycott or take any other concerted action resulting in an unreasonable refusal to deal or engage in conduct that unreasonably restricts the use of intermodal services or technological innovations."

In a news release from SSGA sent to DTN, Darwin Rader, international marketing manager for major exporter Zeeland Farm Services, who also serves as SSGA's secretary/treasurer and competitive shipping action team chair said, "The only way to get out of this is for ocean carriers to return to previous levels of taking containerized exports out of the U.S. instead of such a high percentage of empty containers," Rader said. "There's a lot of frustration among U.S. exporters. We have to keep pushing as hard as we can for carriers to treat U.S. exporters fairly to help restore the balance of trade."

Interpretive Rule on Demurrage and Detention Under the Shipping Act: https://www.federalregister.gov/… 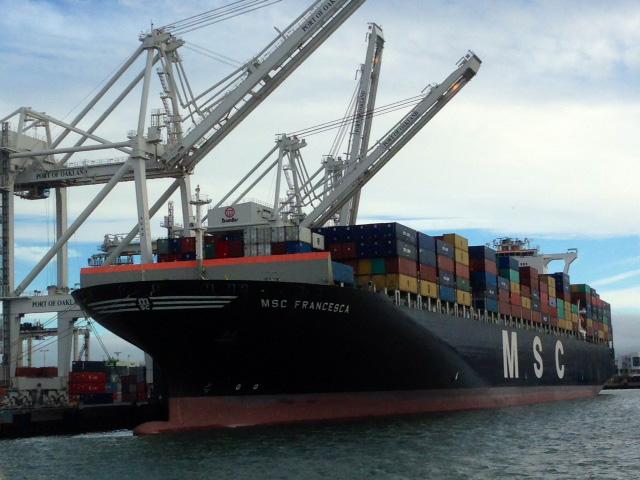