While the Upper Mississippi River (UMR) remains in winter hibernation, the rest of the river system is overflowing with excess water from snowmelt and recent rains. The flooding is preventing barges from moving grain and fertilizer for spring planting.

The UMR will not see its first barge until the ice on Lake Pepin, located on the border of Minnesota and Wisconsin, is below 15 inches -- and preferably 12 inches -- for barges to break through. The U.S. Army Corps of Engineers (USACE) measured the ice on Lake Pepin on March 13, and the thickest ice remained in an area about halfway between Lake City, Minnesota, and Red Wing, Minnesota, where it was measured at 25 inches, up 1-inch versus the March 6 measurement. The next measurement is scheduled for March 20. (https://www.mvp.usace.army.mil/…)

Even if Lake Pepin, located just above Lock and Dam 4, finally opens up for barges, it may be problematic for barges to move upriver as high water is hampering traffic all the way down to the Gulf. American Commercial Barge Line (ACBL) noted on their website March 15 that, because of the snowmelt and ice from the UMR heading downriver, Locks 16 through Lock 22 are expected to close by March 19.

On the Illinois River, waiting barge traffic was stopped at Marseilles Lock and Starved Rock Lock on March 15 because of the high-water flows creating dangerous conditions. The Ohio River at Cairo, Illinois, has reached major flood stage, and on March 17, was at 53.25 feet. Cairo is the confluence of the Ohio and Mississippi Rivers, and from there, the high water will continue to flow south, affecting the rest of the Mississippi River.

Transit through the St. Louis, Missouri, harbor down through the railroad bridge at Thebes, Illinois, is restricted to daylight-only hours, noted ACBL. At Memphis, Tennessee, the Mississippi River is at flood stage. On March 17, the water level was 38.2 feet and is expected to rise to 38.5 feet by March 22 before it starts its slow descent. From Memphis through the Vicksburg, Mississippi, bridge and into Baton Rouge, Louisiana, barges are only allowed to transit through there during daylight hours.

In St. Charles Parish, Louisiana, about 12 miles west of New Orleans, the USACE said that crews will begin to slowly close the Bonnet Carre Spillway on March 15, with the rest of the spillway's closure gradually done depending on water levels. The USACE opened the spillway on Feb. 27 because of high water threatening New Orleans and nearby river communities. Prior to March 15, 206 (75%) of the 350 bays had been opened.

High water, coupled with unrelenting fog and rain, has substantially slowed operations at the Gulf since the second half of December. In its weekly Grain Transportation Report, USDA said that, for the week ended March 9, only 486 grain barges were unloaded in the New Orleans area, the lowest since June 2017.

"This reduction shows in analysis of the number of barges unloaded weekly in New Orleans, with the four-week average being 21% less than the three-year average during the same period of the year," noted USDA.

Mike Steenhoek, executive director of the Soy Transportation Coalition, said in an email to DTN that we often experience flooding this time of the year, but what is unique this year is the fact that:

1: The Midwest and Plains states received record snowfall in many areas.

2: The area experienced both extreme cold and persistent below freezing temperatures so that periodic snow and ice melting that often occurs was more limited.

3: The amount of snowfall and cold temperatures extended later than normal.

4: The ground in many areas of the country was already saturated from 2018.

"The high and more turbulent water conditions are resulting in barge transportation being restricted," said Steenhoek. "This decrease in the efficiency of barge transportation has contributed to a widening of basis at barge loading facilities along the inland waterway system. If a barge loading facility is less able to move product efficiently via their back door (due to restricted navigation on the river), there will be a decreased willingness to accept product from farmers via their front door. The result is a decrease in the price offered to farmers (i.e. a widening or more narrow basis)."

On top of grain loadings being compromised, barges normally heading up river with fertilizer for spring planting will be slow to reach farmers.

"April is often the leading month for northbound barge shipments of fertilizer," Steenhoek said. "We often focus on the use of barges for the export of soybeans and grain, but barge transportation is widely used for inputs, like fertilizer. These deliveries will likely be impeded."

Flooding will also have an impact on rail ballast, gravel roads and rural bridges.

"I don't know of a gravel road or rail track that has a happy coexistence with flood conditions," said Steenhoek. "Rural bridges can also be subject to scour (the removal of sediment such a sand and gravel from around bridge abutments or piers) due to water volume and current. Local and county governments will be particularly stressed to manage these challenges."

The flooding is definitely having an impact on the rail carriers in the southern Midwest. On March 17, Union Pacific (UP) in a news release said that numerous UP subdivisions and corridors in Nebraska and Iowa continue to be out of service due to flooding and track washouts.

"Due to widespread flooding across our network, we have very limited reroute capability," noted the UP. Because of the flooding, Union Pacific is issuing embargoes.

Here is link to the UP announcement that lists the areas affected and has a link to the current embargoes: https://www.up.com/…

Meanwhile, back up north in St. Paul, Minnesota, the river has yet to show any issues from the snowmelt and currently sits at 5.8 feet. However, by the upcoming weekend, the Twin Cities is expected to reach the mid-50s Fahrenheit and as high as 60 degrees by Saturday, March 23, with most of the state following suit or at least reaching the 50-degree range. That means we will have a fast snowmelt, which is going to cause more flooding issues in tributaries and small streams south of the Twin Cities.

The National Weather Service has predicted that the Mississippi River in St. Paul will come close to a minor flood stage of 14 feet by March 25. If forecasts for rain at the end of March into April pan out, we will likely see the river rise even more. That's not good news for the rest of the river system as that high water heads south to the Gulf.

Here is a link to all the U.S. river and tributaries conditions; current and long-range forecast: https://water.weather.gov/… 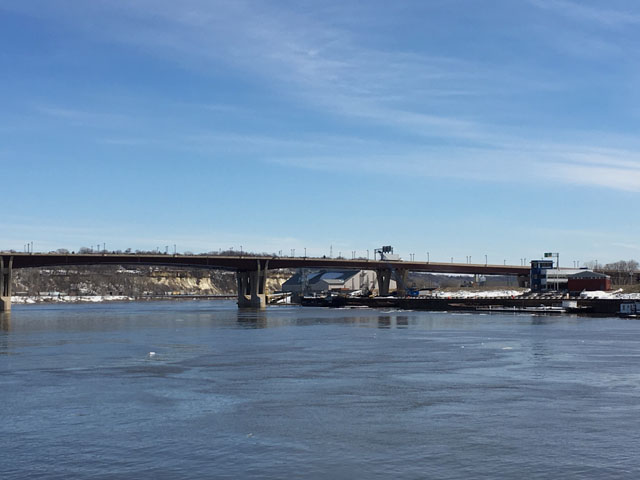