According to a recent press release from the Soy Transportation Coalition (STC), they noted there is "widespread agreement that it is not a matter of if there will be a failure at one or more of our key lock and dam sites, it is a matter of when."

"A failure of significant duration -- particularly during and subsequent to harvest -- would severely impact the competitiveness of the soybean and grain industries and diminish the profitability of the individual farmer. This increasingly likely scenario must be avoided. As a result, an enhanced focus on operations and maintenance to increase the reliability of resiliency of the nation's locks and dams should be adopted."

There are currently 28 locks and dams on the Upper Mississippi River system. This series of locks and dams is operated by the U.S. Army Corps of Engineers and maintains a 9-foot channel on the Mississippi from St. Paul, Minnesota, to St. Louis, Missouri. As the aging locks and dams continue to deteriorate, especially when damaged by floods, the Corps has to make costly repairs, and in some cases, can only make a temporary fix.

The U.S. Army Corps of Engineers (USACE) has said in the past that it is "unable to adequately fund maintenance activities to ensure the navigation system operates at an acceptable level of performance."

The most notable disruption last fall was the multiple closures between September and October at locks and dams 52 and 53 on the Ohio River. These disruptions occurred at the worst time for farmers who were hauling their fall harvest to the river for shipment to the Gulf. Even though the river finally reopened there on Oct. 19, the backlog of tows remained an issue well into November, slowing traffic anxious to get the Gulf for export. Problems continued into January 2018, stalling barges at times from getting up and down river.

In May of 2017, USACE, Rock Island District reported that there were structural concerns on the downstream guidewall at locks and dams 52 and 53 on the Ohio River and Dam 15 in Rock Island, Illinois. Aaron Dunlop, Operations Project Manager for the Rock Island District's Mississippi River Project, said in a press release that four monoliths (a large single upright block of stone) making up a portion of the guidewall, had to be demolished as the failing concrete was creating risk to the navigation system.

"The lower 120 feet of the guidewall is structurally failing, which could result in it falling into the navigation channel," Dunlop said. "If it were to fall into the channel, this would block navigation for nearly a month as crews would need to respond to remove the broken concrete blocking access to the lock chamber."

The section of guidewall that was demolished was original to the project. Locks and Dam 15 was the first lock completed on the Upper Mississippi River as part of the 9-foot navigation system. Construction at Lock and Dam 15 finished in 1934, and the intended design life of the lock was about 50 years, according to the USACE.

According to Mike Cox, chief of the Rock Island District's Operations Division, locks such as those at Lock and Dam 15 have outlived their design life due in most part to adaptive maintenance and periodic major rehabilitation. "The concrete issue on the lock's lower guidewall is indicative of infrastructure that is well past its prime," said Cox.

Guidewalls are integral to each of the Mississippi River Locks and Dams 2 through 10, says the USACE. Guidewalls are long extensions of the lock walls, in either the upstream or downstream direction, that are parallel to the lock wall. These walls serve primarily to guide the long tows into the lock and to provide mooring facilities for tows too long to be accommodated in a single lockage.

"Almost all of the locks and dams on the Upper Mississippi River System, including the Illinois Waterway, are experiencing varying levels of problems due do the age of the infrastructure," Cox said. The teams do a great job of ensuring that critical maintenance is performed, which they have to this point, preventing a catastrophic failure of the system." The locks and dams are critical to the nation's economy as they provide the most efficient method to transport goods and commodities."

President Trump noted in his State of the Union address that he will approve funding of $1.5 trillion for the rebuilding of bridges, highways, locks and dams, airports and other projects.

Yet, as Mike Steenhoek, executive director of the STC told DTN, "We are still anxious to see greater specificity -- particularly regarding funding -- from the White House and Congress on an infrastructure strategy. Funding remains the main obstacle to seeing an infrastructure package transition from an intention to an outcome. As the weeks progress, we anticipate a more specific set of recommendations from the White House and Congress. We look forward to being engaged in this process."

A Jan. 3, 2018, Washington Post article quoted President Trump: "Infrastructure is by far the easiest," the president said Dec. 22, during the bill signing for the tax overhaul. "People want it -- Republicans and Democrats. We're going to have tremendous Democrat support on infrastructure as you know. I could've started with infrastructure -- I actually wanted to save the easy one for the one down the road. So we'll be having that done pretty quickly."

Well then, if it is such an easy fix, the government best hurry up and get something done. "Most of our system represents a single point of failure, because there is only one lock chamber at most sites. So, if one lock experiences a failure, the whole navigation system would likely shut down, which would come with a high cost," said Cox.

In other words, the time bomb continues to tick on our aging locks and dams. 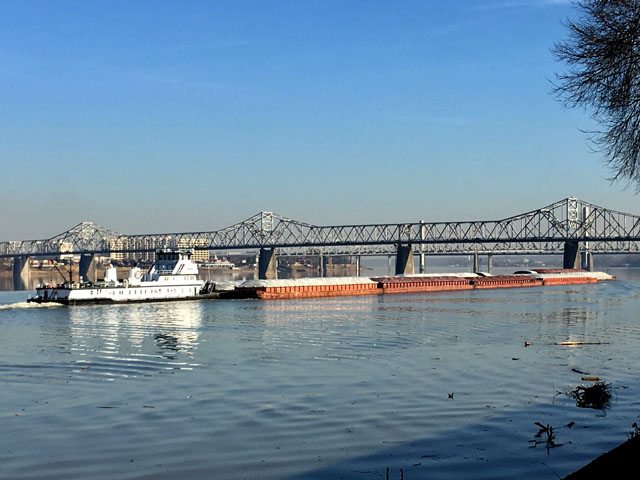