The 2015-2016 crop year started out with soybean basis going strong as old-crop supplies were hard to find and processors had to pay a premium to flush out what was left until harvest started.

By Oct. 1, basis was definitely feeling the pressure at -56 SX15 and a DTN cash index of $8.21 as harvest was rolling along with strong yields being reported. By the middle of October, the DTN cash index rallied to $8.54, but the basis was still at -56 SX15, content to let the futures market control the flat price. As the week rolled on, processor basis weakened overall as farmers moved new-crop beans to market thanks to the futures rally. River basis in the Upper Mississippi was weaker due to low water conditions slowing barge traffic.

Heading in to November 2015, basis moved to the January (SF16) futures, unchanged at -51 SF16 with the DTN cash index at $8.27 on Nov. 1. Rail basis delivered to the Gulf strengthened as beans were having a hard time making it south in barges due to the dredging south of Greenville and low-water safety advisories in effect for the lower Mississippi River, slowing barges heading to the Gulf. By Nov. 9, basis improved to -48 SX16, but the DTN cash index weakened to $8.19. Rains in the Ohio River Valley helped improve water levels in the lower Mississippi River, and once the dredging in the lower Mississippi ended, the river reopened for empties and full barges to move freely without restriction.

By mid-November, the DTN cash index was at $8.09 with the basis at -46 SF16. Soybean futures were pulled lower after USDA reported soybean production of 3.981 billion bushels vs. their October estimate of 3.888 billion bushels and also raised the yield estimate to 48.3 bushels per acre vs. 47.2 the prior month. It appeared the increases made by USDA showed not as many acres of soybeans were victimized by the heavy rains during the 2015 growing season and/or other states that had good weather picked up the slack. Farmer selling slowed at this point due to the cheap cash prices. Exporters in the upper Mississippi River were working to fill their needs at the Gulf as the shipping season was preparing to close for the winter. The 2015 towing season on the upper Mississippi River was extended by a few days due to unseasonably warm weather in the northern Midwest, but on Dec. 3, the U.S. Army Corps of Engineers, St. Paul District, locked the last tow of the season out of St. Paul, Minnesota, signaling the beginning of the end of 2015's upper Mississippi River transport season.

By the end of December, all hell broke loose on the middle and lower Mississippi River as the water levels went from dangerously low in spots to overflowing its banks. River basis levels weakened as river terminals were unable to get barges under spouts in high water to load grain, and anything loaded or empty was either moving at a slow crawl or likely tied off due to river closures. On Dec. 30, 2015, the basis moved to the March (SH16) futures unchanged at -44 SH16 and the DTN cash index had still not improved much at $8.21. Basis levels on the river continued to fade as most of the U.S. river system was shut down due to flooding. The areas that remained open were under high-water restrictions and unable to load barges.

On Jan. 15, 2016, basis remained unchanged, but the DTN cash index improved to $8.38. Basis on the Illinois River weakened as high water and ice flows in some parts continued to hamper barge traffic and the CBOT force majeure remained in place for a few delivery stations on the Illinois River. By the end of January, river conditions started to improve but barges had a slow go of it in the lower portion of the lower Mississippi River, and while the river had crested there, continued navigation slowdowns and logistic delays from Vicksburg to New Orleans were expected for a few more weeks. The DTN cash index was lower at the end of the month at $8.21 and basis wasn't much improved at -46 SH16.

You can see on the chart accompanying this article that basis remained pretty steady through February, ending the month moving to the May (K) futures at -56 SH16 and then started to slowly weaken heading in to March. The DTN cash index at the end of February was lower at $8.08, thanks to South America harvesting a large crop and Brazil exports picking up, putting pressure on U.S. prices.

When March 2016 came to an end, the soybean market got some help from USDA reporting estimates for soybean planted acres for 2016 at 82.2 million acres vs. trade estimates of 83.1 million acres. USDA said that compared with the prior year, planted acreage intentions were down or unchanged in 23 of the 31 estimating states. The March basis ended 5 cents weaker than the first day of March as a strong DTN cash index throughout the month pressured basis, with the DTN cash index on March 31 at $8.53, 48 cents higher than it was on March 1. On April 29, 2015, the basis moved to the July (SN16) futures unchanged at -73 SN16.

On May 10, soybean prices staged a rally, with futures reaching a 17-month high with a DTN cash index of $10.11 after USDA surprised the market with a lower-than-expected reduction in both U.S. and global stocks. The DTN cash index spiked, but fell back toward the third week of May to $9.88 as soybean planting was moving along at a good pace and above the five-year average. By the end of the month, basis rallied to -68 SN16, and the DTN cash index was at $10.18 thanks to fresh export demand and slow farmer selling as most farmers were either still planting or were running short on cash beans.

By the middle of June 2016, soybean futures reached a near two-year high, as dry, hot weather forecasts caused concern in the market. The DTN cash index rallied to $11.07, putting pressure on the basis which was at -71 SX16. At the end of June, soybean basis moved to the November (SX16) futures with a 2-cent hike on the roll at -33 SX16 and the DTN cash index was firm at $10.79 due to dry weather in the eastern Midwest and Delta. U.S. soybeans were still a cheaper value than Brazil at the Gulf and demand continued for export. But, old-crop soybeans were not readily available either due to cheap prices or the fact some farmers had none left.

Following the long July 4th weekend, soybeans staged a late fireworks display with the new-crop November beans losing 60 cents. Rains in parts of the Midwest over the long weekend and more predicted during the week pushed soybeans lower with the cash DTN cash index at $10.48. Basis remained firm at -29 SX16 as the futures price lost ground. By the middle of July, the DTN cash index fell to $10.17, taking a beating after the market was feeling less concerned about a "dome of heat" over the soybean crop in its critical growth stages. The basis wasn't much of a help as it dropped to -41 SX16. By the end of the month, basis turned around to -33 SX16, but the DTN cash index had continued its downward spiral, ending July at $9.45.

At the beginning of August, favorable weather once again pushed the DTN cash index lower to $9.30 as weekly crop conditions remained steady and above the five-year average for that timeframe. Basis moved a little higher to -31 SX16 as the low cash price turned away any farmers who had old-crop soybeans left to sell. On Aug. 12, USDA NASS forecast that U.S. soybean growers would increase their 2016 production by 3% from 2015.

"Soybean yields are expected to average 48.9 bushels per acre, reaching another record-high mark. The acres planted to soybeans remain unchanged from the June estimate. Record soybean yields are expected in Illinois, Iowa, Missouri, Nebraska and Wisconsin. Growers are forecast to harvest 83.0 million acres of soybeans this year," USDA stated. While this news sent the market lower, it didn't last long as soybeans continued to see fresh export business on an almost daily basis during the first half of August.

As the old-crop year came to a close, soybeans came under pressure from the Pro Farmer Midwest Crop Tour estimating that U.S. farmers would likely see a record crop this fall. August weather was ideal for the corn crop in most of the key growing areas and remained nearly ideal for soybeans. Soybean conditions reported for the week ended Aug. 21 by USDA were at a 10-year high for that time of year, which added pressure on the DTN cash index of $9.18 on the last day of the old-crop year. Basis ended the last day of year at -33 SX16, remaining firm as processors continued to look for old crop beans to crush due to the strong meal demand.

There were spikes in the flat price during the year, giving farmers an opportunity to get rid of their old crop and most of them did. Overall, though, it wasn't really a stellar year for soybean prices, especially once the 2015 harvest ended and projections grew for a larger crop in 2016. The DTN average basis of -51 for 2015-16 crop year was the lowest average since 2011-12.

Previous Post (Will Railroads Keep Up During Harvest in US and Canada? )
Next Post (STB Makes Proposal on Rail Transportation of Grain) 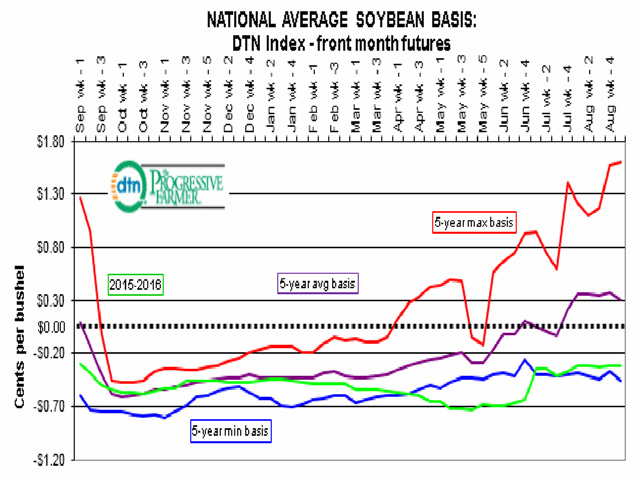