USDA reported that as of November 3, week 44 of the calendar year, only 52% of the nation's corn crop had been harvested; other than the 25% harvested figure in 2009 is the slowest rate of corn harvesting since at least 1981.

The question we have is with all the corn out there being subjected to a variety of adverse weather conditions, will this result in lower harvested acreage and yields, not only in this Friday's crop production report but also the one due out 1/10/20.

Note that 2018 corn yields fell by 4.3 bushels per acre (bpa) from the October to January report last year with harvest conditions reportedly worse this year than last.

The accompanying graphic shows the percent change in USDA's U.S. corn yield estimate from the October to the January crop production reports on the right hand axis (with the exception of 2013 when a government shutdown prevented the release of a number of government reports in October 2013 including crop production and WASDE figures).

We had thought that maybe a late harvest would correlate with October to January corn yield declines with the crop more subject to rains, snow, freezing temperatures, winds and other weather considerations.

Interesting to note that even with the advent of faster maturing seeds and better harvesting equipment, the average pace of corn harvested by week 44 was the same 76% from 1981 to 1999 as it was from 2000 to 2018.

Also interesting is some of the largest October to January yield declines came in years when harvesting proceeded rather smoothly.

Even the largest decline ever posted from the October to the January report in 1993 of 8.70% had 73% of the crop harvested that year.

Looking at the data there is actually a higher correlation between Oct to Jan yield revisions and percent of corn seeded by May 20 than the percent harvested by week 44.

We should note that large Oct to Jan yield declines did come in 2006 and 2007, though seedings by May 20 those seasons were relatively quick at 91% and 92% respectively. 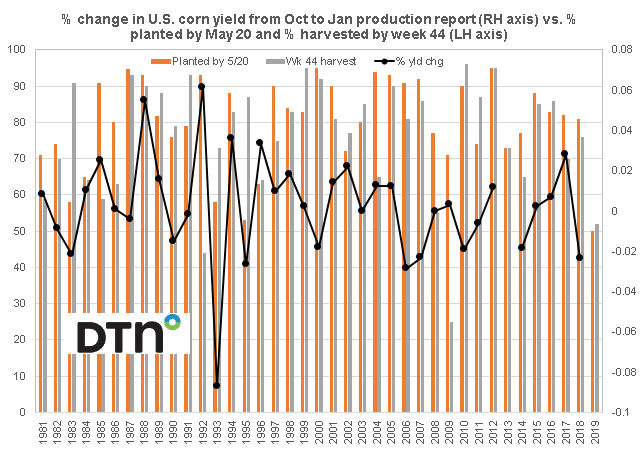