Weighing on the corn futures market besides yield and production coming in much higher than had been anticipated just a few short weeks ago is a lagging export pace. Based on large overseas production in South America, Russia and Ukraine along with ample supplies of feed wheat and former customers that are now self-sufficient or procure their needs from a large list of competitors, the USDA has our projected overseas sales at 1.850 billion bushels, down 19.3% from one year ago. The year ago figure which was the highest in ten years but this year’s estimate is the lowest since the 2012/13 season.

Actually the very weak Gulf basis along with the fact that the latest export inspection report is down 45.9% vs. year ago levels and export sales off 33.6% suggests the USDA may have to pare its export projection in subsequent WASDE reports.

Of course the loss of the world market for U.S. corn has been an ongoing story for years as the accompanying graphic attests to. This chart shows the U.S. share of the world feed grain exports plus the long-term trend from the 1980/81 season to the present 2017/18 marketing year with the feed grains studied including barley, corn, oats and sorghum.

At one point the U.S. share of world corn trade was as high as 84% but in the 2012 drought year plunged to 19.4% and even with a recovery since then this year’s share at 31.2% besides the 2012/13 season may be the lowest ever and the trend shows our share of the global corn trade declining by 1.2% per year.

For barley, about 30 years ago we expected close to 14% of the global total but that is down to literally zero as that crop is grown primarily for malting purposes. We have always had a minor share of the world oat market with Canada and the various Scandinavian countries the real players there.

The only one of the feed grains to hold up however is sorghum as other than a few isolated seasons we still continue to command about 70% of that market and our share of the global sorghum trade has actually trended higher by about 0.2% per year. 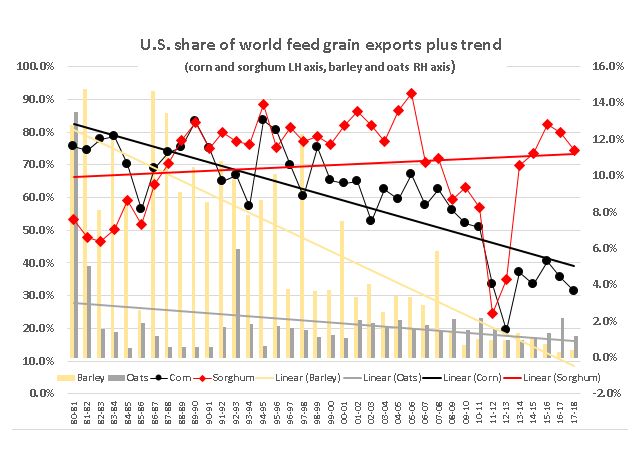