U.S. row crop yield performance in recent years has been superlative with corn setting records in two of the past three seasons including this year's 175.3 bpa figure while soybeans have seen all-time high yields for four consecutive years topped by the 2016 record of 52.5 bpa.

It is interesting then when looking at the USDA's future yield projections contained in their recently released Long-Term Baseline assumptions that this year's corn record is exceeded in 2020 as the USDA has next year's yield at 170.8 bpa and increasing by 2.0 bpa each year and attaining a 188.8 bpa yield by 2026.

On the other hand, the USDA has next year's soybean yield at 47.9 bpa and increases by 0.5 bpa each year peaking at 52.4 bpa by 2026 meaning that over the next ten seasons the USDA does not see yields higher than what was seen this year.

This seems strange in light of the fact that soybean yields seem to be increasing at a faster rate than corn on a relative basis.

These are linear trends of the actual yield ratios and are extended for another ten years going out to 2026 similar to what the USDA has done.

It is not until looking at the 30-year trend where corn yields increase at faster pace than soybean yield, rising by 0.8% each year.

Over the past few weeks and for sure into next year there has and will be a lot of conversation about a likely acreage switch from corn and wheat into soybeans.

Some feel that U.S. wheat plantings will contract about three million for the 2017/18 season with corn planted area off four million and this will result in U.S. soybean seedings rising five, perhaps six million acres.

The reasons for this include most prospective net returns per acre budgets showing soybeans making money with corn and wheat seeing negative returns while soybeans are a cheaper crop to grow and we suspect many bankers will push their farm clients in this direction.

A final consideration is farmers themselves have been amazed at their soybean yields, especially in some of the more peripheral growing areas outside the Midwest and we suspect that some corn to soybean shifting will occur while less winter wheat means fewer double cropped and more full season soybeans that will also enhance the national yield. 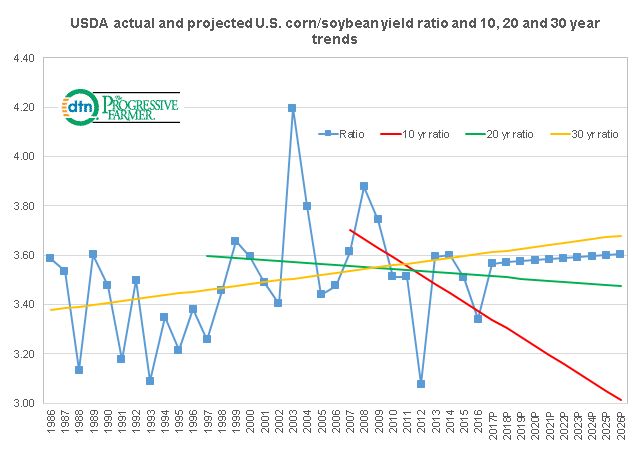