The blue bars on the attached chart show the volume of grain delivered by producers into the licensed handling system over the first 22 weeks of the crop year, or as of Jan. 1. These bars are compared to the three-year average, as shown by the brown bars.

Despite the big rebound in canola production from the drought reduced crop of 2021, canola deliveries are only 5.2% higher than one year ago while 7.3% lower than the three-year average. This bears watching; signaling that producers may be reluctant sellers or the possibility that the crop may not be quite as large as forecast.

The black line shows the volume delivered as a percentage of the total supplies available for delivery, defined as Statistics Canada's July 31 farm stocks estimate added to the forecast production for 2022. These lines are plotted against the percentage scale on the secondary vertical axis. The green line represents the three-year average, which indicates that producers have delivered a higher percentage of available supplies on average for five of the eight crops shown on the chart. 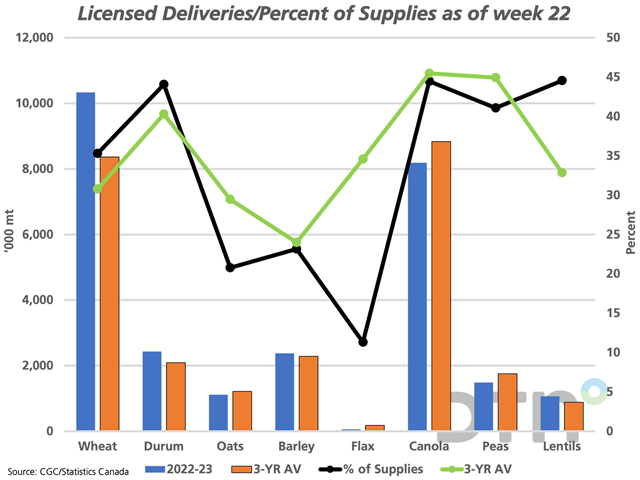