A strong storm system moved into the Plains over the weekend and as of Oct. 25 has moved into Hudson Bay. The cold front to the system is still sweeping through the U.S. This was the first of many disturbances that have lined up around the Arctic Circle that will rotate eastward into North America over the next two weeks.

As I mentioned in my blog last week, the blocks in the upper-level flow are weakening.

They are not absent, and will play a role, but they have changed significantly, shifting out of western North America and Greenland to being more transient across the Pacific Ocean and a little less "sticky" in eastern Canada. In response, several disturbances that are rotating around the Arctic will eventually move their way through North America. The weaker ridge in eastern Canada will have some say in this, and as it gets stronger from time to time it will have the effect of forcing these disturbances southward over western North America.

That sets up a sort of parade of storm systems that will move through the continent over the next couple of weeks. But these are not large storm systems for the most part. They are more compact and complex. Most meteorologists will tell you that models will have a hard time forecasting these disturbances with any consistency. What seems to be a large storm system today could turn into a weak one tomorrow -- or shift around its storm track from place to place. The inconsistency leads to large swings in the forecast for precipitation and temperatures.

This inconsistency is frustrating for forecasters, but it is an understandable feature during such a pattern. There are many more moving pieces than normal for global models to latch onto. Being smaller, there are less grid points in the models that accurately depict each disturbance. And variations in these smaller disturbances can have huge downstream effects. Small errors grow larger with time and lower accuracy.

Therefore, when you see your weather forecast changing over the next couple of weeks, seemingly very different day to day, note that this is all part of the pattern and forecasters are trying to sort it all out.

So, when will models have a better handle on the pattern? It looks like in about 10 days models seem to iron everything out, or the first weekend in November. They have fewer small features around the Arctic and overall larger ridges and troughs from which to produce forecasts. That does not mean your forecast for the second week of November is already known. With the errors in the next couple of weeks building in the models, they may have these features in the wrong spots in 10 days. We cannot be certain that the second week of November will be a more stable situation either. But models do seem to agree that once we get there, we will have a better chance of being more confident in the forecast going forward. So, until then, expect to see some changes. 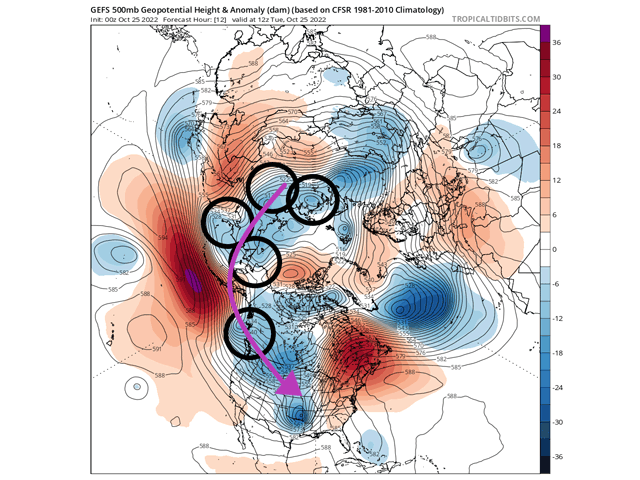