A cold front moved through the central Midwest on Aug. 29 and produced a line of strong to severe thunderstorms during the afternoon. Storms started to develop in eastern Iowa and northwestern Illinois after 10 a.m. CDT and prompted the Storm Prediction Center to issue a severe thunderstorm warning. It took a little while to get going, but once the line reached just west of Chicago around the noon hour, a sufficient cold pool developed, pushing the storms forward, creating severe winds of greater than 58 mph, and expanding the storm system northward into Lake Michigan and southward into central Indiana during the afternoon.

Heat and humidity ahead of the cold front fueled the storms and the line raced forward, eventually outrunning the initial forcing for the storms around 7 p.m. EDT in southern Ontario and northwest Ohio. Higher amounts of shear, which describes the change in wind speed and direction with height, began to run out and caused the line to weaken and dissipate.

Widespread wind damage reports were first noted in north-central Illinois just before noon and continued until the line reached into Ontario and northwest Ohio. Several wind gusts over 70 mph were reported, including two of hurricane strength in Indiana, but the line did not live long enough to be classified as a derecho.

Still, strong wind gusts over 50 mph can do significant damage to maturing corn and soybeans. While reports of that happening are scarce in media coverage, those individuals that did see damage are found where weather conditions have been some of the best in the country on some of the most fertile soils. Yield hits could be significant in those cases. 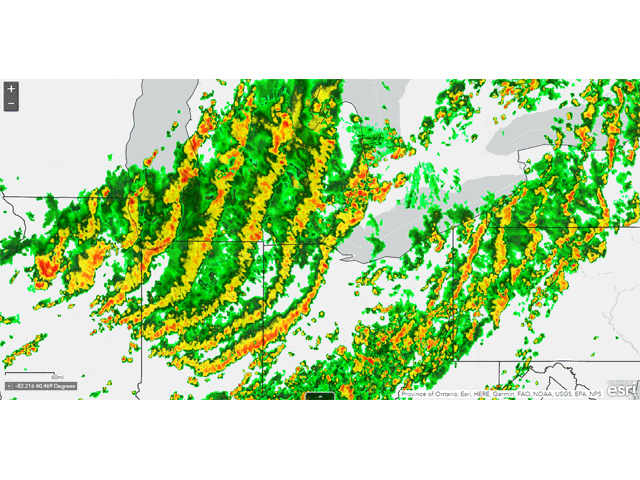