A bomb went off in the central U.S. on March 13. That's when a series of atmospheric disturbances from the U.S. Desert Southwest traversed the Intermountain West and Rocky Mountains, and joined forces in the western Plains. As this storm center intensified, the barometric pressure went down, and down, and down. The La Junta, Colorado National Weather Service office recorded a barometric pressure reading of 971.7 millibars (28.81 inches) at 9 a.m. (Mountain Daylight Time) on Wednesday. That reading was more than 30 millibars under a reading of 1005 millibars (29.78 inches) that was logged less than 24 hours prior, at noon MDT March 12. As noted by CBS4 meteorologist Chris Spears in a tweet Wednesday, this reading "more than exceeds the definition of a bomb cyclone."

A bomb cyclone is defined as a storm center (cyclone) in which the central air pressure drops by 24 millibars in 24 hours -- effectively, one millibar per hour. Obviously, the storm that formed in southeastern Colorado last Tuesday/Wednesday met that definition and then some. These systems are not that unusual over the open ocean, but their development to this magnitude over land is rare. This mid-March storm intensity may have set a new record for Colorado, but the previous identified record-low pressure intensity was logged back in 1973.

A Wikipedia entry on this topic highlights the pronounced bomb cyclone activity over ocean water. The entry notes that: "The four most active regions where extratropical explosive cyclogenesis occurs in the world are the Northwest Pacific, the North Atlantic, the Southwest Pacific, and the South Atlantic."

The timing of the mid-March storm development added to its damaging impact in the Plains and Midwest. The deep storm center acted like a vacuum, with a mighty surge of warm, moist air heading north from the Gulf of Mexico, bringing with it the temperature to quickly melt the heavy snow cover, along with enough air mass contrast to produce moderate to heavy rain and flooding; and, in colder air over the northern and western Plains and the southern Rockies, heavy snow. And, in the Plains and western Midwest, damaging and life-threatening winds were of course featured in the atmosphere's violent move toward re-balancing the air pressure.

DTN's team coverage of the storm's damaging effect on the ag industry is at this link: https://www.dtnpf.com/…

The cost to repair and recover from this storm, adding up road and property damage, equipment damage, and livestock loss, will be very costly. It is not out of line to project that the cost for recovery from this bomb cyclone will reach or exceed one billion dollars.

Here are some highlight snowfall and wind speeds recorded by the NOAA Weather Prediction Center during March 12 to March 14:

There may have also been other locations with greater snowfall and higher winds. Additionally, San Augustin Pass in New Mexico logged a wind gust of 104 mph, and Wolf Creek Pass in southwestern Colorado recorded 45 inches of snow. 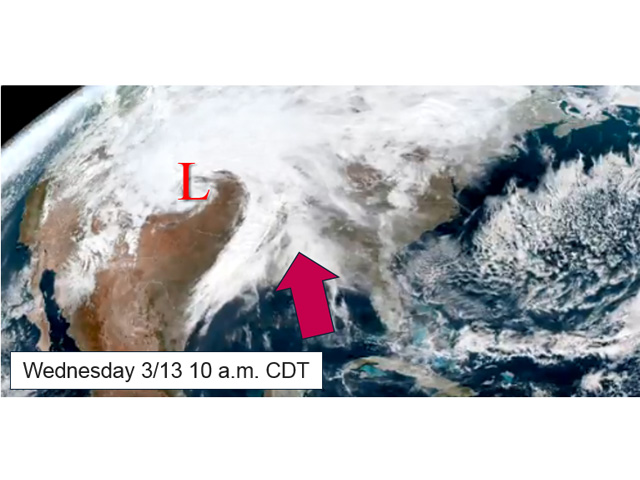 mcowell111820548
8/21/2019 | 3:10 AM CDT
no it's trillion dollar bomb Thanks for sharing.I found a lot of interesting information here. A really good post, very thankful and hopeful that you will write many more posts like this one. Anyways, you can check this out: