OMAHA (DTN) -- The likelihood of more prolonged flooding along the Missouri River increased Thursday night when the Army Corps of Engineers was forced to increase water releases from Gavins Point Dam in South Dakota to 90,000 cubic feet per second because of inflows from the Niobrara River and other watersheds, the Corps stated.

Releases from Gavins Point quickly spiked from 17,000 cfs just a few days ago to 37,000 cfs on Thursday morning. By Thursday evening, the Corps had nearly tripled the release levels. Corps officials anticipate they will be able to scale back water releases from the dam once inflow from the Niobrara River begins to slow.

In Nebraska, major flooding remains along several larger tributaries into the Missouri River. It was a similar situation in western Iowa where the town of Hornick, south of Sioux City, was evacuated because a levee breach and tributaries in southwest Iowa such as the Boyer and Nishnabotna Rivers were significantly flooded.

Updated flood forecasts along the Missouri River by the National Oceanic and Atmospheric Administration (NOAA) showed the river at Plattsmouth, Nebraska, was at 37.15 feet, a record high; Nebraska City, Nebraska, was also at a record high; and Brownville, Nebraska, was at 42.67 feet and could top the record high of 44.79 feet set in the 2011 flood. The river stages were already projected to top record flooding levels before Gavins Point increased its water releases.

The Corps stated operators at Gavins Point are using 12 of the dam's 14 spillway bays and the powerhouse to pass the flows. The remaining two spillway gates are partially open, but frozen in place due to ice buildup. Operators are spilling water over those two gates in an effort to thaw them and return them to operating condition, which dam safety engineers believe presents no risk to the structure or the gates, nor does it affect the Corps' ability to safely pass water pass the structure.

The water being released from Gavins Point is exclusively from unregulated tributaries that bring water into the reservoir, the Corps stated. On Wednesday, the Corps stopped all releases from Fort Randall Dam, the next dam upstream on the Missouri River mainstem, to reduce the amount of water in the lower Missouri River. However, because there is little storage capacity behind Gavins Point, most of what is flowing into the reservoir must be released downstream.

"Given the amount of water still expected to come out of the tributaries, we expect we will hold at 90,000 cfs through Saturday morning, provided the current inflow trends are maintained," said John Remus, chief of the Corps' Missouri River Water Management Division in Omaha. "As that unregulated runoff decreases, we will be able to decrease outflows from Gavins Point."

Remus cautioned, however, that river levels could remain high in places for several days to a week as conditions in the different basins normalize.

The "bomb cyclone" that hit Wednesday and Thursday flooded dozens of towns and cities across a wide swath of Nebraska and South Dakota into Iowa and down into northwest Missouri, shutting down much of the region outside of Omaha.

Roughly 8,000 people in Norfolk, Nebraska, about one-third of the town's population, were asked to evacuate early Thursday morning because of risk of levee breach. In other parts of western and central Nebraska, people were being asked to evacuate in blizzard conditions.

Levees were breached and at least one dam was breached along the Niobrara River in northeast Nebraska near the South Dakota border that appeared to take out the bridge on Highway 281, a key artery. Bridges were wiped out, which shut down access to several communities.

Southeastern South Dakota, including Sioux Falls, was facing similar flooding challenges and water topped Interstate 90 west of the city. Gov. Kristi Noem closed state offices across all of South Dakota on Thursday, and the vast majority of counties in the state also shut down their courthouses because of blizzards and flooding.

DTN Senior Ag Meteorologist Bryce Anderson said the storm system that can be described as a "bomb cyclone" out of Colorado caused flooding in two ways. First, the vacuum-type intensity of the cyclone led to a powerful inflow of warm air from the Gulf of Mexico into the central Plains and Midwest, causing a rapid melting of a snow cover of at least a foot deep. The ground beneath the snow was frozen from a cold, late winter and was already saturated from heavy rain last fall, so all the melted snow is now running into rivers and streams. Secondly, warm air from the south had a full load of Gulf of Mexico moisture, which resulted in rainfall of record amounts in some locations -- generally 1 to 3 inches in the western Midwest, which simply added to the snowmelt and runoff.

Near Neligh, Nebraska, Kenny Reinke faced high winds and snow Thursday morning, with close to zero visibility at times, while dealing with heavy rains from the prior day and a half that caused extensive flooding throughout most of northeast Nebraska. Reinke noted one problem for the rain and runoff was that much of the ground remained frozen and was absorbing little of the moisture. Reinke said, normally, his farm can handle a typical heavy rainfall. "But in this case, it's not so much the amount of rain, but nothing can take it in because everything is frozen. I've never seen anything like this," Reinke said.

"I do have a wheat crop on a couple quarters and it was in tough enough shape as it was. This could be the dagger in it," Reinke said. "I'm not sure how much will be abandoned. I'm also worried about some clay soil hills -- the water was cutting right through roads, so there might be some gully erosion."

Reinke added, "My heart goes out to the livestock guys, we're in calving season right now."

The livestock industry is getting hit hard with extreme weather in Nebraska, with a blizzard raging in the western part of the state and widespread flooding in the central and eastern parts of the state.

Pete McClymont, the executive vice president of the Nebraska Cattlemen, told DTN the punishing weather is creating a lot of stress for livestock producers.

"Even the best livestock managers are going to have issues in these types of conditions," McClymont said.

First, it was low temperatures and winter weather affecting the calving season. High death loss is expected as cow/calf producers have to be present to ensure calves born outside in these tough conditions get warmed up in time so they can survive.

Now, it is dangerous flooding as heavy rains Wednesday on frozen soil pushed streams and rivers out of their banks and forced the closure of many rural roads and highways. This has created even more strain on livestock, but also on those who take care of them.

McClymont gave the example of his organization's president, Mike Drinnin, who operates a feedyard north of Columbus, Nebraska, and Drinnin's son, Sam, who runs their feedyard near Palmer. Sam lives away from the facility, and it took him two hours to get to their yard this morning, he said.

Farther west in the Nebraska Panhandle, a severe blizzard is raging across the Sandhills. The weather is keeping cattle producers in many cases from even checking on their livestock currently, he said.

McClymont said Thursday morning he has had multiple conversations with Nebraska Gov. Pete Ricketts' office, and the Nebraska Department of Agriculture and its director Steve Wellman. While it is too early to know the extent of the damages from the challenging weather, the group is monitoring the situation closely.

Doug Ruskamp, a cattle feeder near Dodge, Nebraska, like a lot of feeders in his area, is fortunate enough his cattle are largely kept in pens on a hillside. "We don't have much trouble with the actual flooding, but our biggest problem is our lagoons are pretty full because of all the rain and snow melt," Ruskamp said. "Our pens are sloppy and muddy but not horribly deep, so we're kind of fortunate that way, I guess."

At the time he spoke to DTN, Ruskamp was sitting on a highway with area farm ground and the road inundated with water. "We're sitting on Highway 32 just west of West Point (Nebraska) and I've never seen this much water here. It's unbelievable." Ruskamp said he has some fed cattle scheduled for delivery early next week, "but I'm glad I didn't schedule them for this week, because I would have never got them out."

Another area feeder told DTN workers were cut off from the feedyard and it was impossible to get some fed cattle to a packing plant because so many roads were cutoff.

Farther south, in northwest Missouri, Richard Oswald was evacuating his farm along the river bottom with most of the population of Atchison County, because the forecast projected a possible record crest of the Missouri River near Brownville, Nebraska, over the weekend. That risks topping the levee that protects multiple northwest Missouri towns. There were more highway closures in southeast Nebraska as well. 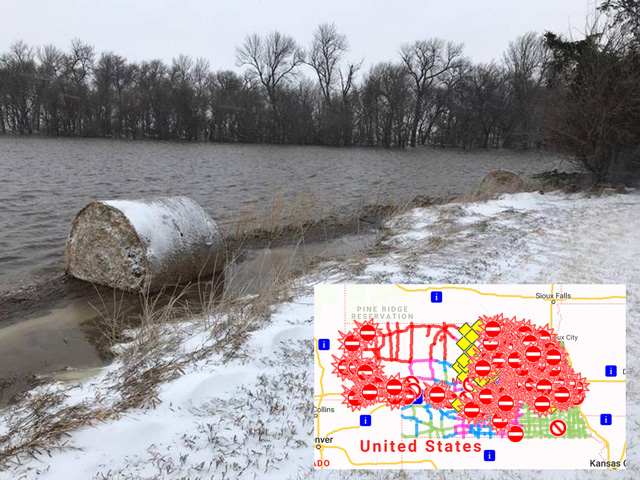