Lean Hogs: The more active April contract closed $0.25 lower at $73.55. April lean hogs remain in a secondary (intermediate-term) downtrend. The contract posted a new 4-week low of $71.675 last week, with support pegged between $72.10 and $70.50. These prices mark the 38.2% and 50% retracement levels of the previous uptrend from the contract low of $63.75 through the recent contract high of $77.25. Weekly stochastics remain bearish below the overbought level of 80%.

Corn (Cash): The DTN National Corn Index (NCI, national average cash price) closed at $3.30 3/4, up 5 1/2 cents for the week. The NCI remains in a secondary (intermediate-term) uptrend on its weekly close-only chart. However weekly stochastics are above 80%, indicating a sharply overbought situation and in position for a bearish crossover, as the NCI tests resistance near $3.30. This price marks the 61.8% retracement level of the previous downtrend from the high weekly close of $3.48 through the low weekly close of $3.00.

Soybean meal: The March contract closed $4.30 lower at $331.40. The contract continues to post a series of spike highs followed by dramatic sell-offs. It could be argued that its secondary (intermediate-term) trend is a wide-ranging sideways pattern between the recent spike high of $351.20 and spike low of $310.30. Weekly stochastics remain neutral-to-bullish above the oversold level of 20%, and below the midpoint of the stochastics range at 50%. 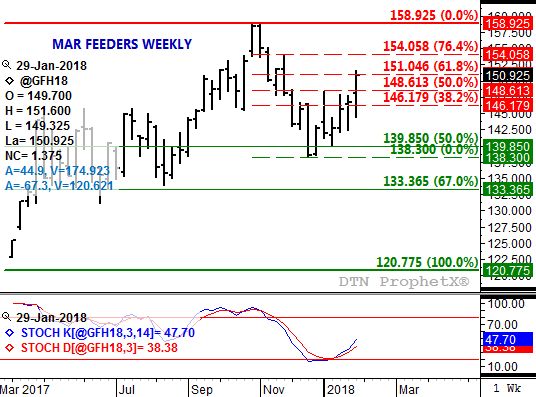