Live Cattle: The April contract closed $3.275 higher at $122.275. Though it hasn't established a clear indication of ending the previous secondary (intermediate-term) downtrend, April live cattle look to be nearing a bullish turn. The contract needs to see a move to a new 4-week high above $125.175 to signal a bullish breakout, despite the fact weekly stochastics did not cross below the oversold level of 20%.

Feeder Cattle: The March contract closed $2.95 higher at $145.60. Similar to live cattle, March feeders are nearing a bullish breakout. Despite weekly stochastics not establishing a bullish crossover below the oversold level of 20%, a move to a new 4-week high beyond $148.55 would signal a secondary (intermediate-term) uptrend.

Lean Hogs: The more active April contract closed $1.175 higher at $75.50. Despite the higher weekly close the contract remains in a secondary (intermediate-term) downtrend. This stems from the previous week's bearish reversal and the recent bearish crossover by weekly stochastics above the overbought level of 80%. Initial support is at the 4-week low of $73.60. 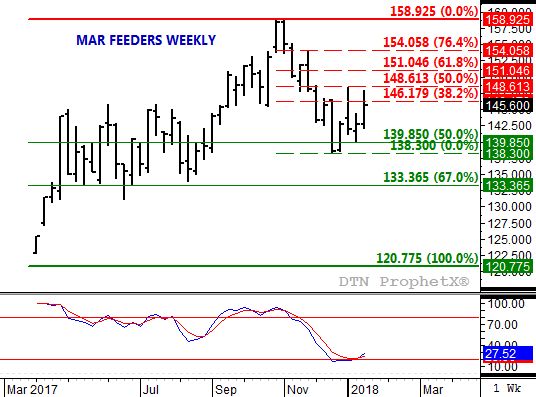