Feeder Cattle: The March contract closed $0.675 higher at $142.65. The contract remains in a secondary (intermediate-term) 3-wave downtrend, However, weekly stochastics are near the oversold level of 20%, possibly limiting new selling interest.

Lean Hogs: The more active April contract closed $1.75 lower at $74.325. The contract moved into a secondary (intermediate-term) downtrend last week as it posted a bearish reversal. This means it traded outside the previous week's range before closing lower for the week. Last week's low of $74.325 was a test of initial support near $74.05, a price that marks the 23.6% retracement level of the previous uptrend from $63.75 through last week's high of $77.25. Next support is at the 38.2% retracement level near $72.10.

Soybean meal: The March contract closed $4.90 lower at $310.30. A week after posting a bullish outside range, indicating a possible move to a secondary (intermediate-term) uptrend, March meal fell to a new 4-week low of $310.30. It could still be argued, from a technical point of view, the secondary trend remains up. However, the market's weekly close-only chart is showing a seasonal sideways trend. 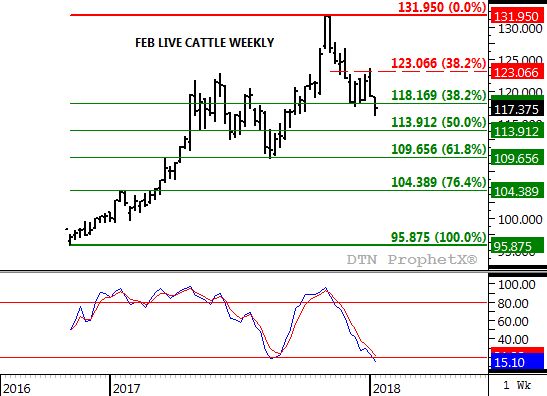