Live Cattle: The December contract closed $0.525 lower at $116.60. While the contract's minor (short-term) trend remains down on its daily chart, the weekly chart continues to show a secondary (intermediate-term) 5-wave uptrend. Combining the two would suggest the minor trend would be Wave 2, a move that tends to see a 76.4% retracement of Wave 1. If so, that would put the Wave 2 target near $109.65.

Feeder Cattle: The more active January contract closed $1.725 lower at $151.325. The contract's secondary (intermediate-term) trend is down with initial support near $145.725. This price marks the 23.6% retracement level of the previous uptrend from $114.95 through the high of $115.225. Weekly stochastics posted another bearish crossover above the overbought level of 80% last week, indicating the contract could start to build bearish momentum.

Lean Hogs: The December contract closed $2.65 higher at $64.85 last week. The contract's secondary (intermediate-term) trend remains up based on the bullish outside range posted the week of September 25. The next upside target is $65.675, the high from the week of July 3.

Soybean meal: The December contract closed $11.50 lower at $317.10. The contract looks to be in secondary (intermediate-term) and major (long-term) sideways trends. Support this month on the long-term monthly chart is calculated at $309.20 while resistance is at $346.20. 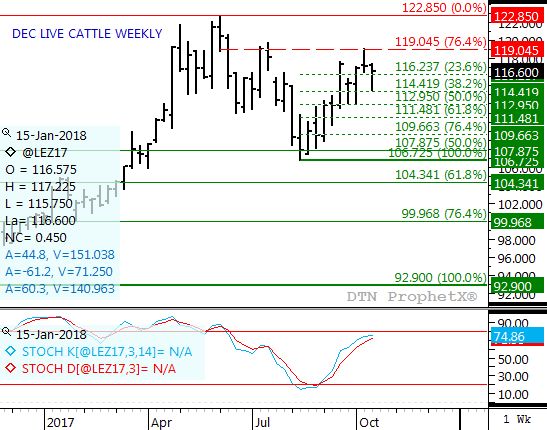