Monday, October 19, 1987: Though it was 30 years ago, I remember it like it was yesterday. I had graduated from Fort Hays State University in northwest Kansas the previous May, with a political science degree no less, and promptly went to work dumping trucks and running fertilizer for my hometown Lewis Cooperative. I had worked at the co-op over my high school and college summers, so it seemed normal going back until I figures out what I wanted to do with the rest of my life. Anyway, on Monday October 12, I walked into the co-op's commodity office, Lewis Commodities, and stated something along the lines of, "I think the stock market is going to go down." Our broker, Don if I recall correctly, helped me fill out the paperwork to open a commodity trading account so I could buy an October S&P put option, a trade that would appreciate in price if U.S. equities did indeed move lower. I couldn't afford to trade S&P futures (that’s a story for another day) given initial margin was in the thousands of dollars.

The October S&P options were set to expire either that coming Thursday or Friday. And as you can see by the accompanying chart the Dow Jones Industrial Average (DJIA) did indeed start to fall; losing 12 points that Monday, gaining 37 points Tuesday, falling 97 points Wednesday, another 55 points Thursday, and 108 points Friday. Cashing out before the options expired, my young self (along with my older brother, who happened to be in the commodity office the previous Monday morning and decided, "Why not?") felt like I'd won the lottery. My best friend Tom (who also worked in the office of the co-op) and I celebrated over a taco lunch at the local pub roughly a block down Main Street. My brother, as he had been all week, was deep in fall harvest.

The following Monday, as we all know by now, was Black Monday. It's easy to see on the chart as the DJIA left a gaping hole on its daily chart, opening 117 points below the previous Friday's close, before finishing the day down 510 points, or off 22% of its total value. This is still considered, by some calculations, the largest single-day sell-off, by percentage, in the history of the DJIA. The effects were felt worldwide, resulting in new rules creating "circuit breakers" to keep such a move from happening again.

On a personal level, I could've have bemoaned the loss of a fortune if I had known enough about how option contracts worked to roll to the next month. But I didn't. Instead, I was intrigued by the move and wanted to better understand what, in the structure of the market as a whole, led to the collapse and why I had that felling something calamitous was about to happen the previous week.

That search for understanding markets continues to this day; be it through fundamental, behavioral, or technical analysis. The many stops along the way I made before joining DTN roughly 14 years ago gave me a wide array of viewpoints in which to study. I'm sure this will be true for as long as I continue to watch the markets.

One more note about Black Monday: My technical analysis mentor, Ray, was known for keeping point-and-figure charts on graph paper by hand each day of 30-year T-bonds, pork bellies, and the S&P 500. Point-and figure charts note each tick a market makes, allowing you to look for intraday patterns to trade. He proudly displayed his S&P chart from the Black Monday event around his door, meaning it ran along the top frame until the big break Friday through Monday. That section of the chart, he had to keep taping new sheets the bottom, ran from the top of his door frame to the floor.

An incredible chart for and incredible day. Remembrance of the events of October 19, 1987 may bring a little extra meaning to the nearly 10-year uptrend the DJIA has been in since March 2009, this week (appropriately) climbing above the 23,000 mark. 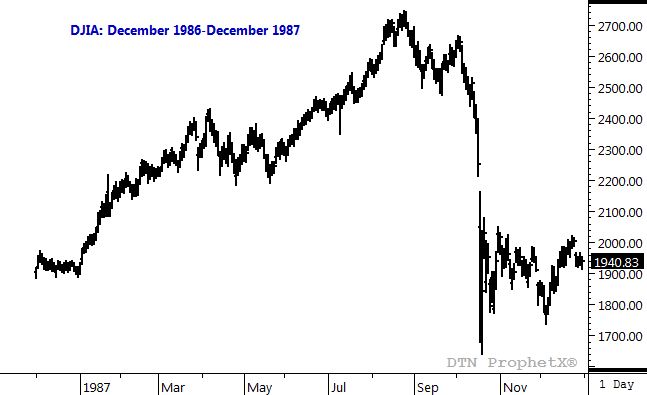