Feeder Cattle: The more active January contract closed $0.65 lower at $153.05. Given the contract's minor (short-term) downtrend, January feeders could also see the secondary (intermediate-term)) trend on its weekly charts turn down. The contract posted a new high of $155.225 last week, putting initial support at $145.725. With weekly stochastics still well above the overbought 80% level, the contract could eventually test support between $139.85 and $135.10.

Lean Hogs: The more active December contract closed $1.275 higher at $62.20 last week. The contract's secondary (intermediate-term) trend still looks to be up based on the bullish outside range posted the week of September 25. However, the market's minor (short-term) trend is set to turn down on its daily chart with resistance at the recent high of $63.45.

Soybean meal: The more active December contract closed $9.40 higher at $328.60. The contract remains in a secondary (intermediate-term) uptrend, with initial resistance at the previous high of $348.70. 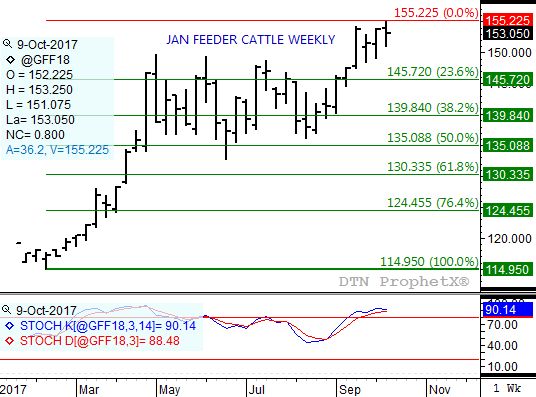