Live Cattle: The August contract closed $3.025 higher at $117.80. Despite the higher weekly close, August live cattle remain in a secondary (intermediate-term) downtrend following the double-top formation near $127.50 and double bearish crossover by weekly stochastics above the overbought level of 80%. The recent rally can be attributed to a minor (short-term) uptrend on the contract's daily chart resulting in a test of resistance near $118.25, but could extend its minor uptrend to $120.05 before daily stochastics climb above the overbought level of 80%.

Feeder Cattle: The August contract closed $9.250 higher at $154.275. Despite the higher weekly close the contract remains in a secondary (intermediate-term) downtrend. Trendline resistance this week is at $157.80, a price that corresponds to minor (short-term) resistance on the daily chart between $154.80 and $158.15. Daily stochastics are above the overbought level of 80%, setting the stage for a possible move to a new minor downtrend.

Lean Hogs: The August contract closed $3.325 lower at $79.90 last week. The spike reversal signaling a move to a secondary (intermediate-term) downtrend from the previous week still looks to be in place. The contract is moving toward next support at $78.10, a price that marks the 38.2% retracement level of the previous uptrend from $66.325 through the recent high of $85.375. Given the proximity of weekly stochastics to the overbought level of 80%, August lean hogs should be able to extend this downtrend to at least the 50% retracement level of $75.85. 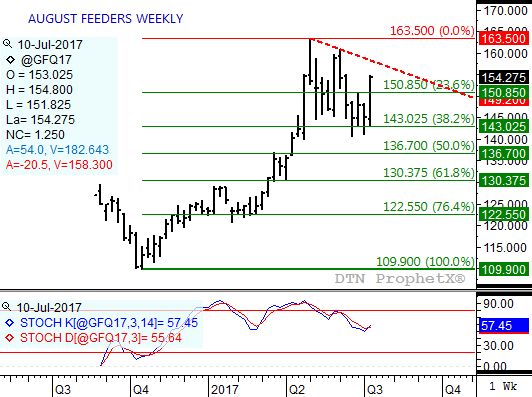