SRW Wheat (Cash): The DTN National SRW Wheat Index (SR.X, national average cash price) closed at $4.95, up 55 1/2 cents for the week. The SR.X extended its secondary (intermediate-term) uptrend with the next upside target at $5.03. This price marks the 61.8% retracement level of the previous downtrend from $6.01 1/4 through the low of $3.44. However, weekly stochastics have climbed above the overbought level of 80%, possibly hinting at increased selling interest over the coming weeks.

SRW Wheat (New-crop Futures): The Chicago July 2018 contract closed at $5.70 1/4, up 42 1/4 cents for the week. New-crop July SRW wheat remains in a secondary (intermediate-term) uptrend. Weekly stochastics are nearing the overbought level of 80%, indicating buying interest could continue to slow.

HRW Wheat (Cash): The DTN National HRW Wheat Index (HW.X, national average cash price) closed at $4.55 up 51 1/2 cents for the week. Cash HRW wheat remains in a strong uptrend on both its weekly (secondary, intermediate-term) and monthly (major, long-term) charts. With weekly stochastics show the HW.X in an overbought situation, major resistance is between $4.23 1/4 and $4.80 1/2.

HRW Wheat (New-crop Futures): The Kansas City July 2018 contract closed at $5.81, up 43 cents for the week. New-crop Kansas City wheat's secondary (intermediate-term) trend is up. However, weekly stochastics have moved above the overbought 80% level.

HRS Wheat (Cash): The DTN HRS Wheat Index (SW.X, national average cash price) closed at $7.30 1/4, up $1.08 1/4 for the week. Cash HRS wheat extended both its secondary (intermediate-term) and major (long-term) uptrends last week, with the next major target up at $7.83 1/2. However, weekly stochastics show SW.X to be sharply overbought as the indicator nears a bearish crossover above 90%.

HRS Wheat (New-crop Futures): The Minneapolis September 2017 contract closed at $7.71 3/4, up $1.05 1/2 for the week. The contract remains in a strong secondary (intermediate-term) and major (long-term) uptrend. Last week's rally saw September Minneapolis extend its run toward next major resistance at $8.00 1/4, a price that marks the 50% retracement level of the previous major downtrend from $11.20 through the low of $4.80 1/4. 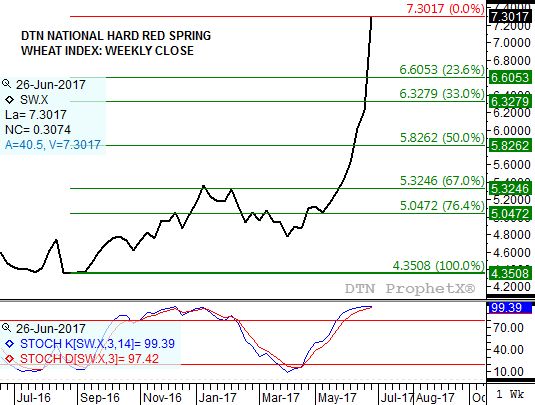