Live Cattle: The June contract closed $4.275 higher at $128.30. The contract spiked higher again last week before falling back from its peak of $134.55 Friday. Weekly stochastics established another bearish crossover above the overbought level of 80%, suggesting the contract could have rolled to a secondary (intermediate-term) downtrend. However, the June-to-August futures spread saw its inverse strengthen to $7.125 last week, reflecting strong commercial buying. This could limit a possible noncommercial sell-off, with initial support pegged near $120.15. Friday's CFTC Commitments of Traders report showed noncommercial interests reducing their net-long futures position by 2,607 contracts to 127,907.

Feeder Cattle: The August contract closed $1.275 lower at $153.425. The contract looks to have moved to a secondary (intermediate-term) downtrend after posting a new high of $163.50 before closing lower for the week. This creates a spike reversal, and led to weekly stochastics establishing a bearish crossover above the overbought level of 20%. If so, initial support is at $150.85, a price that marks the 23.6% retracement level of the previous uptrend from $109.90 through last week's high. The 38.2% retracement level is down at $143.025.

Lean Hogs: The June contract closed $2.325 higher at $76.325 last week. The contract's minor (short-term) uptrend looks to have run its course with a test of resistance near $77.375 last Friday. This price marks the 76.4% retracement level of the previous minor downtrend from $80.35 through the low of $67.775. Daily stochastics turned bearish with a crossover above the overbought 80% level. The contract could now begin Wave C (third wave) of its 3-wave secondary (intermediate-term) downtrend.

Corn (Cash): The DTN National Corn Index (NCI.X, national average cash price) closed at $3.30 3/4, up 5 3/4 cents for the week. The NCI.X moved to a secondary (intermediate-term) sideways trend on its weekly close only chart. The higher weekly close allowed weekly stochastics to post a bullish crossover, though well above the oversold level of 20%. Initial support remains at the recent low weekly close of $3.17 1/4 with resistance the recent high weekly close of $3.35.

Soybean meal: The July contract closed $1.10 higher at $316.80. The contract remains in a secondary (intermediate-term) uptrend, consolidating between support at the recent low of $309.60 and resistance at the 4-week high of $323.60. Weekly stochastics are holding below the oversold level of 20%, establishing a secondary bullish crossover confirming the contract's bullish reversal the week of April 10.

*The weekly Commitments of Traders report showed positions held as of Tuesday, May 2. 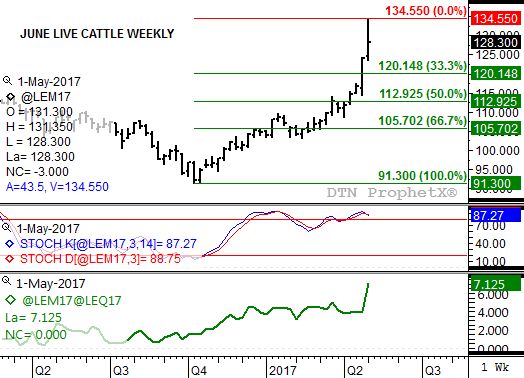