Lean hogs: The April contract closed $0.825 higher at $71.075 last week. The spike to a new high of $72.65 followed by a sell-off through last week's close established another bearish crossover by weekly stochastics, indicating the secondary (intermediate-term) trend could be turning down. If so, initial support is near $66.80, a price that marks the 33% retracement level of the previous uptrend from $55.05.

Corn (Cash): The DTN National Corn Index (NCI.X, national average cash price) closed at $3.37 1/2, up 8 cents for the week. Cash corn looks to have reestablished its secondary (intermediate-term) uptrend with recent downtrend signals trumped by the market's major (long-term) uptrend. This has the NCI.X in position to test next resistance on its weekly close only chart at $3.42 3/4, a price that marks the 50% retracement level of the previous downtrend from $4.00 1/2 through the low of $2.85 1/4.

Soybean meal: The March contract closed $10.50 higher at $342.10. The secondary (intermediate-term) trend remains sideways between support at last week's low of $330.50 and the recent high of $353.70. The futures contract posted a bullish outside range last week, setting the stage for a retest of its recent high. If so, that should pull weekly stochastics above the oversold level of 80%, setting the stage for a bearish crossover. 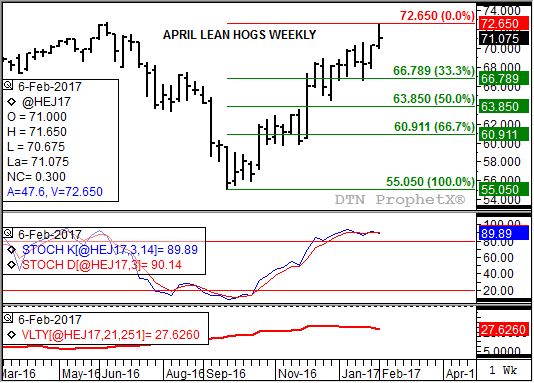