Gold spent much of the latter part of 2016 in a downtrend, having topped out with its high of $1,377.50 around the time fireworks were going here in the United States early last July. The 3-Wave secondary (intermediate-term) downtrend saw its first consolidation during October before gaining momentum through its Wave C finish of $1,124.30 the week of December 12.

Note that the final low was a test of support at $1,123.80, a price that marked the 76.4% retracement level of the previous secondary uptrend from $1,045.40 through the $1,377.50 high. And after a tight consolidation range the week of December 12, February gold rallied last week establishing a bullish crossover by weekly stochastics well below the oversold level of 20%. A final confirmation of the turn to a secondary uptrend would come with a move to a new 4-week high, this week sitting at $1,190.20. 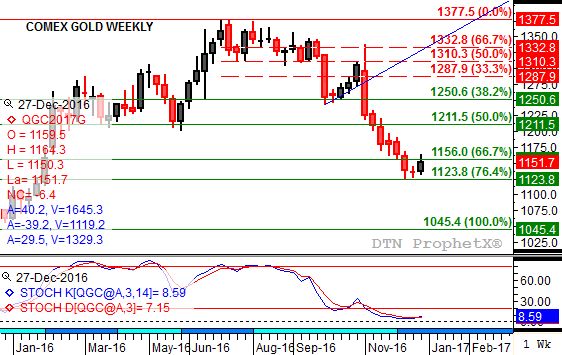