With all the histrionics about trade, tariffs, retaliatory measures, etc. especially with China, one would think this would have a depressing impact on future soybean sales where China is by far our largest customer.

Yet the USDA is actually forecasting U.S. soybean exports next marketing year at a record high 2.290 billion bushels, up 225 million from this season.

This is based on continued strong global import growth of at least 5.0% and sharply reduced South American competition due to an Argentine drought that will enhance U.S. export sales for the first half of the 2018/19 season.

This graphic shows new crop U.S. soybean export sales in million bushels as of the third week in May plotted on the right hand axis.

These sales as a percent of the first USDA new crop soybean export projection are then plotted on the left hand axis along with the projected U.S. share of world soybean trade.

Current soybean sales on the book for next year total 204.2 million bushels which is the highest figure for this time of year since the 2014/15 season so perhaps the USDA is justified in looking for higher overseas sales next year despite trepidations about our trade relations with China.

Still this is just 8.9% of the 2.290 billion projection, which is the third lowest level of the past ten seasons.

Furthermore, our percent of world soybean trade continues to slip, projected at 38.5% vs levels close to 70% twenty years ago, which is due to the incredible expansion in South America during that time. 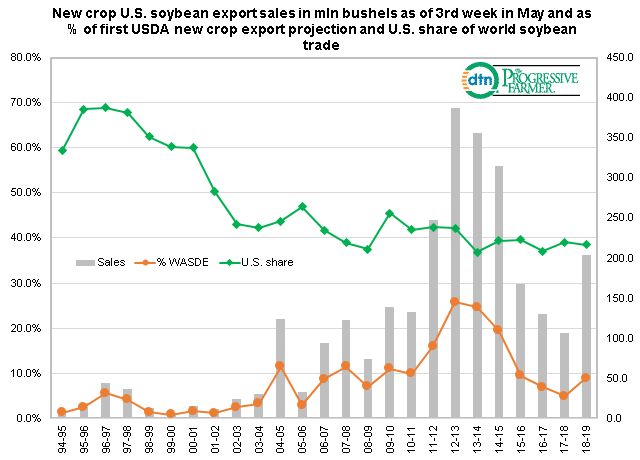