With January 2017 just around the corner, here is a look at how futures markets for selected grains tend to act during the month, while considering the percent change in price over January on the continuous monthly chart. On average, over the past five years, both canola and corn futures tend to close higher in January, with the canola future averaging a .5% increase in January, while corn futures have average a .9% increase.

While DTN's Five-Year Seasonal Index chart shows that corn prices tend to drift lower into mid-January, the month-over-month percent change in price shows the corn future gaining 3.7% in the month ending January 2016, while gaining .9% on average over the five-year period. Prices increased in three of the five years, with the largest monthly loss seen in 2015 at 6.8%, while the largest monthly gain was seen in 2013 at 6.1%.

Soybean prices eased in three of the five years in question in the month of January, falling an average of .3% over the five years. DTN's Five-Year Seasonal Index chart shows soybean prices dipping in late December only to trade sideways over much of January prior to moving into a longer-term uptrend which continues until late June. The largest January loss was seen in 2015 at 6.1%.

Canola futures tend to move into their period of seasonal strength during the middle of December, which tends to last until late June or early July. Over the past five years, the continuous chart shows the canola future falling in three of the five years in question, while the overall average points to a .5% gain for the month. The largest downward move was seen in January 2016, with price settling 2.3% lower.

Hard red spring wheat prices are currently in their period of seasonal weakness, which lasts into late February. Over the last five Januarys, the nearby future has settled lower over the month in four of the five years, averaging 3.3% lower by the end of January. January 2016 resulted in the only move higher over the past five years with a 1.4% gain, while the largest month-over-month drop was realized in 2015 when the price dropped 10.5%.

This week's poll asks what percentage of your 2016 production has been priced. You can respond to this poll which is found at the lower-right side of your DTN Home Page. We thank you for your input! 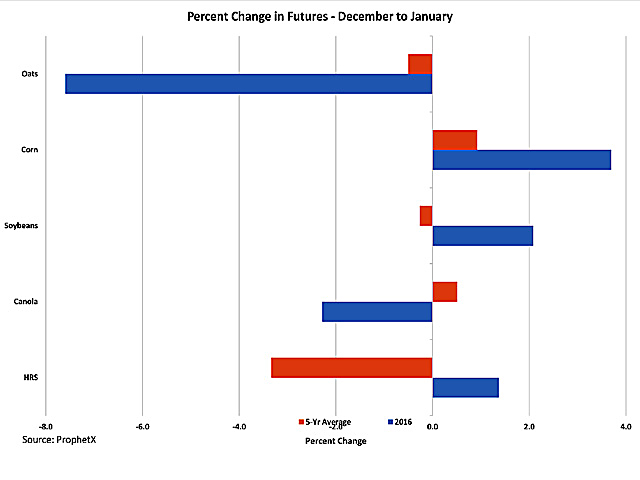