Just one week ago, the post-Mother's Day week offered a great deal of promise for U.S. corn planting. The forecast for May 13-19 suggested that a drier weather pattern would set in; and, in turn, give a chance for corn planting to possibly approach the 43-percentage-point leap ahead that we saw back in 2013, the last time that corn planting had started out on such a slow note.

And, slow it is. USDA's weekly progress report released May 13 shows U.S. corn planting progress as of May 12 at just 30% -- only 7 percentage points up from a week earlier. That 30% is only half of the 59% complete a year ago and 36 points below the five-year average. This is the third-slowest start to corn planting on this date going back to 1993. In that year, only 27% of the corn crop was planted. Meanwhile, 2013 saw 28% of the U.S. corn crop planted by May 12.

Only 10% of the corn crop is emerged, well below 25% last year and only one-third of the average emergence rate of 29%.

Meanwhile, that weather pattern change is not living up to last week's expectations. With each passing day, the forecast has looked less promising, with poor drying weather due to frequent episodes of scattered light rain and cool conditions. We have now reached the point where significant rainfall could return to the region as soon as May 17, with frequent episodes of significant rainfall expected over the weekend and next week.

With the weather we are seeing this week, it is unlikely that we are going to see planting advance as much as expected on next report on May 20. With next week looking wet, progress will likely remain well behind normal in the May 28 report as well. The thought of prevent planting for corn is becoming more likely, with each passing week showing no major break in the wet weather pattern.

The reason for this wet weather is due to a strong high pressure blocking pattern in Canada, which is keeping Canada and the northern U.S. on the cool side. There is also an active storm track across the U.S. due to the blocking pattern forcing the jet stream further to the south, plus the weak El Nino in the Pacific Ocean.

Planting progress for spring wheat in the Northern Plains has picked up, but remains well behind normal, as does progress for corn. With the prospects for cold and wet weather developing later in the week, progress will remain slow, especially for corn.

Across the Southern Plains the adequate-to-surplus soil moisture continues, generally favoring the developing winter wheat crop. Near to above normal rainfall over eastern areas could increase disease pressure as crop development advances. 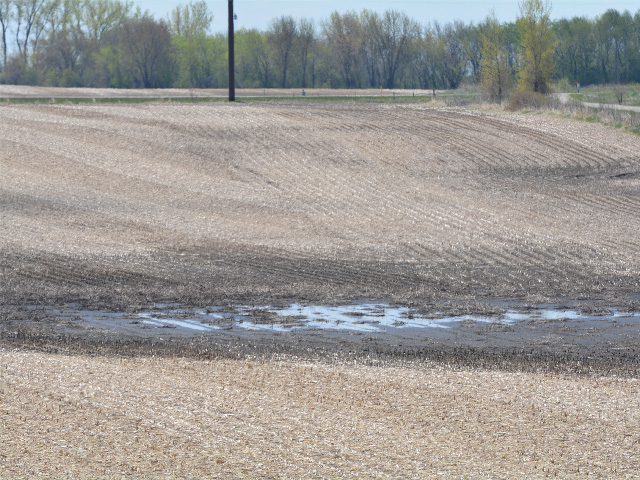