His central Ohio farm absorbed a record annual rainfall of 55 inches in 2018, with much of it coming throughout the fall. As a result, Peters missed the window for his fall herbicide applications, strip tillage and P and K applications.

Even the work that did get done was compromised, he noted. "Of the 240 acres of wheat sown, I'll probably only save 80," Peters said. "We had too much rain, and it was sowed too late." He's also facing field compaction and messy seedbeds, and experts are predicting lower soybean seed quality and germination this spring.

The current weather isn't helping, either, Peters said. "There is no let-up in the moisture," he said. "We are getting hammered and flooded right now."

"I wonder how widespread this is?" he added.

Very widespread, explained DTN Senior Ag Meteorologist Bryce Anderson. "Most of the Midwest is facing the potential for wet soils to delay the start of fieldwork," he said. "And the late-winter pattern does not show that trend changing."

The northern and central Delta is also wading through winter after a wet fall, and parts of the Southeast are still recovering from the deluges of Hurricane Florence, he said. "In the Plains, we've seen some drier trends recently in the central and southwestern areas, but otherwise there are either saturated soils now or soils that will likely be pretty soaked before spring," he added. "South-central and southeastern sectors of the Plains have the highest chance of having this develop."

"Heading into the spring, growers always have to have a Plan B," concluded Kevin Nelson, an independent agronomist based in Illinois. "But when looking at a season like this, they really need a plan C and maybe a D, E and F, too."

Peters' spring to-do list is a familiar one to many Illinois growers, Nelson said.

"That crop was in the field so late, there really wasn't a chance to finish the season the way most farmers would -- with tillage, burndowns and fertilizer," he said. "There's a whole lot of stuff hanging over their heads right now that they will have to think about in late March and April."

Missed fall herbicide applications will likely be among growers' first concerns, as unchecked winter annuals begin to sprout in March.

Henbit, pennycress, purple deadnettle and chickweed are common winter annual concerns in the Midwest, but marestail is by far the most problematic, Nelson noted.

The weed overwinters well as small rosettes and emerges early and aggressively in the spring, often carrying multiple types of herbicide resistance, most commonly glyphosate and ALS-resistance.

Early-emerging summer annual weeds could cause problems, too. "The later the burndown is pushed back, the more likely lambsquarter, ragweed and waterhemp can come up and cause problems," Nelson said.

Fertilizer retailers and farmers could also face a crush of work early on in the spring, as nitrogen and nutrient applications were also among the casualties of the long, wet fall and delayed harvest. "I have almost no P and K applied," Peters said.

Soils paid the price for the wet harvesting conditions this past fall. Compaction from heavy machinery on wet soils can cause problems throughout the season, from poor emergence to shallow-rooted plants.

Ruts will also be a problem, Nelson said. "Almost everyone has some field damage to think about," he said of north-central Illinois. "Especially if growers are no-till, the damage from rutting and heavy machinery are things that take a while to work out."

Peters, who farms some low-lying river bottom fields, also has to contend with floodwaters and the sodden piles of debris and crop stubble left behind. "We have a big mess to clean up in the bottoms," he said. "When you get bean or corn stubble piled 6 inches deep or higher, it just never dries out. We plowed some with a bulldozer last year, but others we had to plant around."

Soybean seed quality will likely be lower than usual this year, after many bean fields in the Midwest and South endured multiple wetting and drying cycles and a delayed harvest this fall. See the DTN story here: https://www.dtnpf.com/….

"I'm hearing that there is a ton of germination rates that are less than 90% from a lot of different vendors," Nelson noted.

Growers will have to handle beans as carefully and infrequently as possible, he cautioned. "Seed coats are more fragile, and too much handling can lower germination rates even further."

"Seed treatments will protect what you have and give every seed the best chance it has to become a viable plant," he said. "It will not take a dead seed and bring it back to life."

Peters' plans for spring planting prep hinge, as always, on the cooperation of the weather.

Anderson isn't optimistic about that for many growers this spring, however.

"For the Midwest, Delta, Southeast and most of the Plains, spring could be a slow season to get going," he cautioned. "It looks like April and May will trend drier, but with the rest of February looking quite cold, and continuing into March, the time frame for getting fieldwork done will be shorter than what we need in many areas."

Some fields may not be salvageable, Anderson added. "It's not out of the question that prevented planting could be a bigger feature this year," he said.

Other parts of the country may fare better, however.

"It looks like the Mid-Atlantic and Northeast will have a drier spring -- producers would welcome that after battling wet conditions last fall," Anderson said. "The western and northwestern U.S. is mixed, with some easing of drought. The southwestern and western U.S. are of course the driest regions right now." 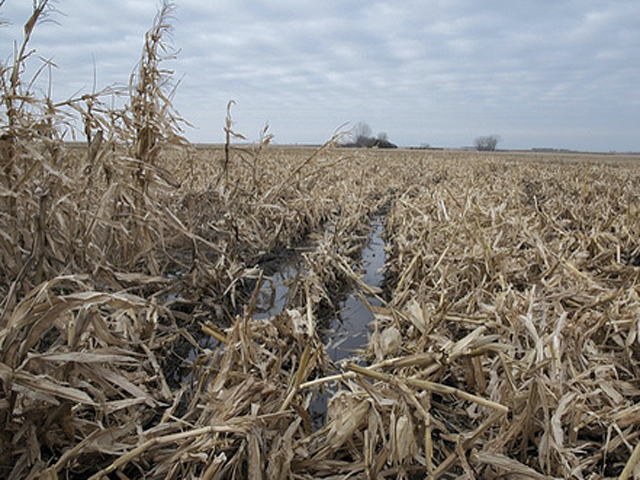 Jack Waddle
2/13/2019 | 10:48 PM CST
"When you get bean or corn stubble piled 6 inches deep or higher, it just never dries out. We plowed some with a bulldozer last year, but others we had to plant around." When it gets dry enough, we have gotten along good with piling up the stubble and putting it into a manure spreader and spreading it on higher ground so it doesn't wash back up again the next time it floods. Takes a lot of time but its quicker than trying to burn it.