For the better part of four decades, inflation wasn't really a thing. Prices increased a little bit every year, and no one batted an eye. Now, it seems like everyone, including the Uber driver that drove me to the Federal Reserve Bank of Kansas City for the annual Agriculture Symposium, has something to say about it. That's because everyone is feeling the pinch of rapid price increases, whether it's fuel, fertilizer, groceries or childcare.

"The recipe for inflation is pretty straightforward," Kansas City Federal Reserve President Esther George told attendees. "When demand for goods and services exceeds the economy's ability to supply those good and services, prices go up. And in this situation, the nature of demand and supply really are posing some challenging issues."

In the immediate aftermath of the pandemic, the Federal Reserve dropped interest rates back to zero and bought $4 trillion of assets. Lawmakers injected $6 trillion of fiscal stimulus into the economy.

"Together, the emphasis on fiscal policy and monetary policy provided a massive boost to the U.S. economy, which encouraged consumers to spend. And spend they did," she said, adding that spending shifted sharply away from services toward goods. The labor market recovered very quickly, and George said that means Americans have money to spend. Demand for goods remains 10% above where it was before the pandemic.

"I think what's more surprising though, from my perspective, is really what I'm going to call the underperformance of supply to meet that demand," she said. The rate of inflation would suggest the economy is growing at a gangbusters rate, but gross domestic product (GDP) still about 2.5% below pre-pandemic levels. "It's unfamiliar territory, because we haven't really thought about the supply side of the economy for a long time."

George said the pandemic caused persistent, and perhaps permanent, damage to the productive capacity of companies, whether that's disruptions in the supply chain, services sector or workforce and labor markets.

Prior to the pandemic, the movement of shipping containers around the world was very carefully coordinated. While those took the biggest hit early on, the disruption has migrated to other parts of the supply chain, like warehouse capacity and fuel refining capacity. (For more please read: https://www.dtnpf.com/…)

Russia's war on Ukraine has only added to problems, especially in the energy and agriculture sectors.

"We know the price of wheat is now double what it was a year ago," she said. While that's positive news for some, "I think any optimism around the price of those commodities has really been damaged by their angst about rising input costs, particularly fertilizer."

Broadly speaking, George said the biggest question around supply constraints is how long they will persist. "I think what we could see is this idea of efficiency and just-in-time production, both networks could give way to the accumulation of more unproductive inventories. You could begin to see a preference for resilience over efficiency as we go forward."

Inflation in the services sector is growing at the fastest rate in 30 years. That's unusual given consumers' large shift away from the services sector. She said lower fixed costs in service-based businesses allowed them to cut capacity very quickly, and what the economy is likely seeing is a services-led recession. A prime example is haircuts. Employment in hair salons is down 15% from pre-pandemic levels, and yet the average price of haircut increased 5%, more than twice the pre-pandemic average.

Since baldness is not a side effect of COVID, demand for haircuts is relatively unchanged. What's happened is that larger salons and businesses closed, while smaller operations have survived, she said. Excess capacity was removed from the marketplace, and now stylists are busy and can set their own rates.

Unemployment rates are around historic lows, but the total number of workers is about 1 million below pre-pandemic levels. Early on, much of that was women dropping out of the workforce, many because of childcare arrangements. Many of those women are back at work, and the shortage is largely people older than 65, who historically would return to work when the labor market is this tight.

"And another factor is the significant decline in the number of immigrants that are available to our workforce," George said. "And again, if we just drew a trendline to where we were before and where we might see immigrants as part of the workforce, we're short about 3 million of those workers. So the labor force is clearly struggling to find supply."

George said the Federal Reserve cannot fix supply shocks or labor force issues, but monetary policy does play a role in "calibrating the imbalances between supply and demand. And so when we see inflation at these levels, monetary policy has to dampen the demand that we see to bring it into alignment with supply to take the pressure off of these prices."

The tools at the Fed's disposal are blunt. George anticipates a series of 50 basis point increases in the Federal Funds rate, which is the basis of short-term interest rates, with rates up 200 basis points by August.

There are a number of factors that make the Fed's job of tamping down inflation even harder -- production issues and continued lockdowns in China, the role of the Russia's war on Ukraine, and the trillions of dollars of savings U.S. consumers have built over the past few years.

"That could make our job of cooling off demand more challenging."

George, who also farms in Missouri, will be retiring from the Federal Reserve in January 2023, in accordance with the mandatory retirement rules for Reserve Bank presidents. You can read more on that here: https://www.kansascityfed.org/… 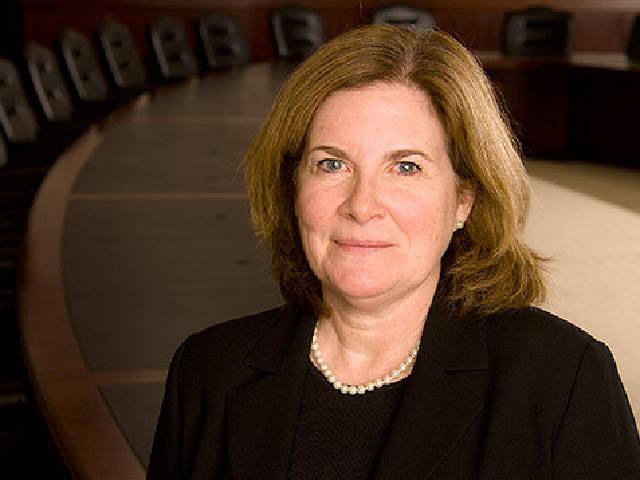