INDIAN WELLS, Calif. (DTN) -- Michael Swanson, the Minnesota-based agricultural economist for Wells Fargo, the largest commercial lender to agriculture, painted a rosy picture for American commodities for the next several years -- unless the weather interferes.

Speaking at the annual meeting of the Crop Insurance and Reinsurance Bureau (CIRB) at Indian Wells, Calif., Swanson said he believes "Life is good." With corn currently above $5 per bushel and soybeans above $12, Swanson said he expects prices to remain high "all the way to 2025."

And while farmers have been complaining that their crop insurance expenses are rising with high commodity prices, Swanson pointed out that farmers pay only 3% of their crops to protect 80% of their revenue.

"Giving away 3% of your crop to protect 80% of your revenue is A GREAT DEAL," Swanson said on a slide in his presentation. "The mechanism designed is very good," and the industry should tell farmers they should not "skimp" on their crop insurance, he said.

(A CIRB official said 3% is only the money an individual farmer pays for crop insurance. The federal government pays about 67% of the crop insurance premium.)

There is no drought predicted this year in the "I" states -- Illinois, Iowa and Indiana -- which produce most of the commodities, Swanson said, but years of good crops could increase stock carryovers and bring prices down while drought could reduce supplies and increase prices.

Swanson acknowledged fertilizer prices are so high they are "unsustainable," but he said the last few years have been good for farmers, first with the federal government payments to make up for the loss of exports to China and then the pandemic-related payments.

The higher farm incomes in the past year have been due to higher commodity prices, not government payments, he said.

Although input prices began rising in 2020, most farmers had priced their inputs in 2019 when they were not so high, Swanson said, adding that farmers are now experiencing the higher input prices.

"Farmers never admit to being wealthy," Swanson said, adding that the most his own farmer cousins will say when times are good is that they are "healed up." That means, he said, they are "floating on cash."

Swanson warned, however, that farmers should be cautious about buying big pickups and condos in Arizona and Florida. There is a question, he said, of "who spends faster -- the drunken sailor or the sober farmer."

He said it is "good news" that a shortage of computer chips means production of pickups has been slowed down. Condos and houses in the Sunbelt are an expense, not an investment, he said.

He also said farmers should not agree to farmland rents so high they cannot make a profit. Farmers need to be disciplined about these decisions and also not make financial moves just to avoid paying taxes.

As interest rates rise, "farm real estate values are facing headwinds," he said, and buyers will have to compete for loans with industries that are more lucrative than agriculture. But he also noted that only about 1% of farmland changes hands each year and said, "Buyers are extremely well financed."

While equipment seems expensive, tractors are not so expensive if inflation is taken into consideration and the amount of labor is reduced, he said.

Retirement and hedge funds have begun investing in farmland as an alternative to stocks, Swanson said. On a recent trip to Hawaii he said he was "stunned" to find Canadian investment funds were investing in farmland on Maui, even though people who lived there said they can't understand how the Canadians can ever make money on this land.

But these land investments, Swanson said, are a part of "portfolio theory" that says people should also have a portion of their assets devoted to "something completely different" from most of their assets.

Biofuels also have been good for corn and soybean prices because they found a new use for those commodities, Swanson said. But he said he tells farmers, "The biggest problem in your future is Tesla." As electric vehicles rise, gasoline demand will go down and biofuels will follow.

The Chinese will not continue large-scale imports of corn indefinitely because they are increasing domestic production, but they will continue to import lots of soybeans, he said.

Although the Bureau of Labor Statistics said Thursday that inflation soared over 7.5% over the past 12 months, the steepest spike since 1982, Swanson said that is a matter that will have to be handled in policy and will be.

Americans still have slightly more purchasing power than in 2010, he said.

The reality, Swanson said, is that the U.S. economy is "very, very strong." If interest rates rise from zero to 3.5% and inflation goes down, business will adjust to the new set of circumstances, he said.

But he concluded that the number of workers in the country is still 3 million less than before the COVID-19 pandemic.

"We will be really headed up as an economy when we are employing more people than before," he said, adding that would mean 153 million people employed. 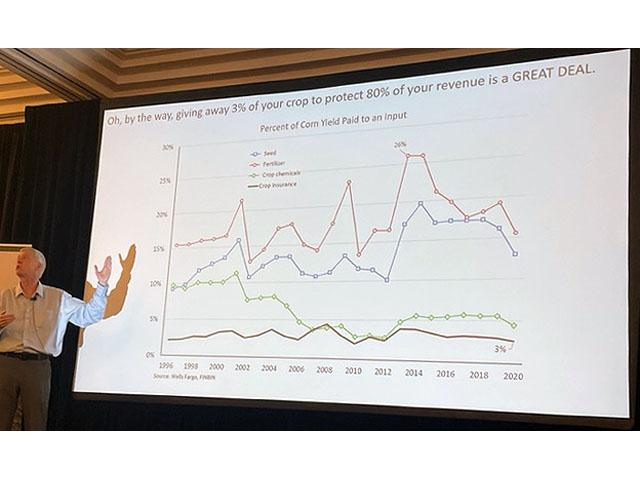