I have an 820 Massey disk. It is a great finishing disk and really does a great job of cutting and covering. However, ever since I bought the used disk, I have had trouble with the outside disk on the front left gang breaking out in the center. I have replaced the same disk three times since I have owned the machine with no other disk breakage. I make sure the gang is tight every time I head to the field. What could be causing this problem?

Unless you have been turning to the left with the disk in the ground, more than likely you need to check and make sure the outside disk holder is of the proper width. Many times, that piece gets lost when the axle nut comes loose, and replacement parts, like old gang bearings and centers from broken disks, end up against the outside disk. The area on the disk the center piece covers is very important. It supports the disk and keeps down the flexing motion of the disk that creates stress cracks. This is why the spools on the inside disks are so large in diameter, and the size of the outside disk holders is so important. The photos with this article show the problem, the cause and the fix. The new holder is an inch larger in diameter.

I have an older IH square baler that is doing something I don't understand. The auger that feeds the hay over to the feeder fork quit turning, so I took off the shield and noticed the belt that drives the auger was broken. I jumped in the truck and went to the auto store with belt in hand. I found a replacement the same length and put it on. I started to bale, and the auger was turning backward -- cramming the hay on the side away from the feeder forks. I parked it and finished with the round baler. I'll be the first to tell you that I am not a mechanic, but I thought I could at least install a belt and not mess anything up. What could I possibly have done wrong?

Your question is not that unusual. The belt on this baler must be crossed, forming a figure eight. Yes, the belt will rub a little in the middle, but since the belt turns so slowly, it will not hurt itself. A belt that is crossed reverses the rotation on the driven sheave, which, in this case, drives the auger. One more little thing that could help you: When installing a belt on a split sheave without an idler, such as your application, it is best to tighten the nuts until snug. Then rotate the machine a few rounds with the flywheel. This will keep the sheave from pinching the belt as you tighten it. Repeat this process until the sheave bottoms out. At this point, the belt should be tight. If not, you can adjust the tightness of the belt by removing or adding shims. Relocating shims from the middles of the sheaves will also allow you to change the speed of the auger.

Raise your hand if you have ever had a truck or tractor unattended, and have it roll away because it was not left in gear or placed in P, or the parking brake was not set. My hand is up in the air, and I bet most of you out there have your hand in the air, too. I was at the elevator a couple of months ago, and a guy with a hay fork came up to buy a round bale of hay at the feed store at the elevator. He had his hay fork up in the air when he entered the store. His truck started rolling backward. The side of a 42-foot aluminum hopper-bottom grain trailer loaded with corn ended up where the bale of hay should have been. Be careful when you leave a vehicle. We must always be careful "how we roll." 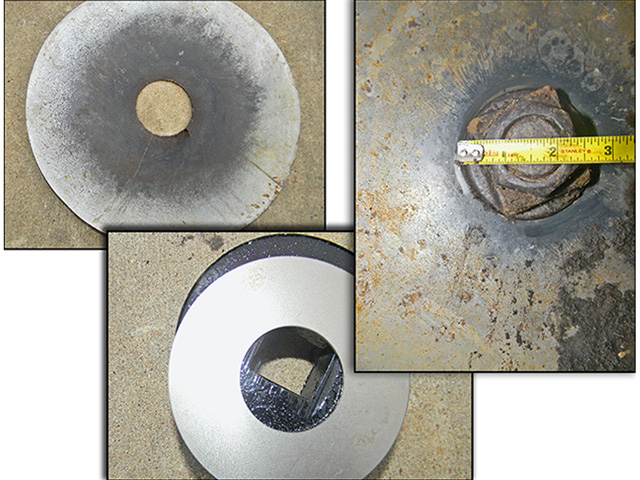