OMAHA (DTN) -- The U.S. House Agriculture Committee is a microcosm of Congress heading into Tuesday's election. Simply put, more Democrats are fighting for their seats in competitive races than Republicans.

Just in case you've been in a combine all fall, Republicans are favored to take control of the House. Fewer GOP members are in competitive races and Republicans need to pick up just four seats to gain control.

Among a large block of House Democrats in campaign battles are seven two-term House aggies who were swept into office in 2019 after the 2018 midterms when the House flipped control under the Trump administration. The aggies represent a core group of Democratic moderates who have walked a fine line with their own party.

Also, as of now, two Illinois Democrats on the committee and three Republicans have chosen not to run again or already lost their seats.

The House Agriculture Committee is expected to draft a farm bill in 2023, but the committee could be looking at educating a lot of fresh faces about farm-bill policy and programs next year as well.

ARIZONA: Rep. Tom O'Halleran, a three-term incumbent, saw his district shuffled to a more GOP-leaning district. GOP candidate Eli Crane is a former Navy Seal and small-business owner whose company had been promoted on the TV show "Shark Tank." Crane is slightly favored in the Arizona 2nd District.

CALIFORNIA: Two-term Rep. Josh Harder in the 9th District is slightly favored over GOP candidate Tom Patti, a county supervisor in San Joaquin County, which makes up most of the district. Harder has focused on being a moderate in the race while Patti has leaned harder to the right in a swing district.

CONNECTICUT: Rep. Jahana Hayes, also elected in 2018, is in a toss-up race in her 5th District seat. Hayes now chairs the Ag Subcommittee on Nutrition, Oversight and Department Operations. At least one poll has given Republican George Logan the edge. Logan is a former state senator.

IOWA: Rep. Cindy Axne, another of the two-term incumbents in the Iowa 3rd District, has made her bones trying to show she's more conservative than most of her Democratic colleagues. Politico calls her race a toss-up while Cook Political Report leans toward Republican Zach Nunn, a state senator and former Air Force lieutenant colonel. The 3rd District, which includes Des Moines, shows higher Democratic voter registration but includes several deep-red rural counties as well. A Nunn win, along with Sen. Chuck Grassley's re-election, would also put a GOP lock on Congress for Iowa, controlling both Senate seats and all four House seats.

KANSAS: The newest Democratic member of the Ag Committee, Rep. Sharice Davids, a two-term member, just joined the committee in June. Davids is favored over GOP candidate Amanda Adkins, a corporate executive in Johnson County, a former U.S. Senate staffer and former chairwoman of the Kansas GOP. While Davids is favored, this would be a race to keep an eye on if the election turns into a GOP "tidal wave."

MINNESOTA: The same could be said for Democratic Rep. Angie Craig, another two-term member in Minnesota's 2nd District race. Craig, who has been on the committee for four years, has backed multiple agricultural and biofuel bills. She is favored over GOP candidate Tyler Kistner in a repeat of the 2020 race.

NEW YORK: Rep. Sean Patrick Maloney, in office since 2013, is slightly favored in New York's 17th District on the northern tip of the New York City suburbs, even though he chairs the Democratic Congressional Campaign Committee. Like a lot of incumbents on this list, Maloney's district was redrawn and less favorable. Cook Political Report considers the race a toss-up while others have Maloney favored over Michael Lawler, a state assembly member and former executive director of the state GOP.

OHIO: The second-longest-serving woman ever in Congress, Marcy Kaptur has been in Congress 39 years. She was likely recruited or drafted to join the Ag Committee back in May because of nutrition issues. Kaptur's 9th District from Toledo to Cleveland had been pretty safe, but the district was redrawn, and voter registration is more closely split. Kaptur is favored against Air Force veteran J.R. Majewski, who "is closely aligned with the MAGA wing of the party and gained fame for painting his lawn into a giant Trump shrine," according to Politico. Majewski lost party backing, though, for falsely claiming he served in Afghanistan. If the GOP sweeps up on Tuesday in Ohio, this is a race to watch.

VIRGINIA: Rep. Abigail Spanberger, another member of the 2019 class, chairs the Conservation and Forestry Subcommittee and co-sponsored the Growing Climate Solutions Act in the House. In the Virginia 7th District between Richmond and Washington, D.C., Spanberger, a moderate, had two close election wins in a district once held by Republican Eric Cantor. In a reconfigured 7th District, Spanberger is in a toss-up again against Yesli Vega, a county supervisor and former police officer. Spanberger's race has drawn a lot of attention and high-profile stumping because of the proximity to D.C. political media.

WASHINGTON: Rep. Kim Schrier -- again a member of the 2019 class -- is in a toss-up race in the state's 8th District, a swing district for Washington. GOP candidate Matt Larkin is a lawyer, former state attorney general candidate and co-owner of a pipe-product company.

House Democrats will lose an agricultural leader with the retirement of Rep. Cherie Bustos in the Illinois 17th District, who has served on the committee since 2013 and now chairs the General Farm Commodities and Risk Management Subcommittee. The race to replace her in northwestern Illinois is a tossup.

Also retiring at the end of this year is Rep. Bobby Rush, first elected in 1992, whose 1st District has largely represented south Chicago. Rush joined the committee in 2021 when Democrats added more urban lawmakers to fill out the committee roster. He has introduced bills on urban agriculture and supporting Black farmers.

Overall, most Republicans on the committee are in safer districts. Here are a few races stand out.

TEXAS: The closest House aggie GOP race is in the southeastern tip of the Lone Star State. The 34th District seat is held by Rep. Mayra Flores -- the newest Republican committee member. Flores won a special election for the seat in June. She faces Democratic Rep. Vicente Gonzalez, who was in the Texas 15th District, but tossed into the race with Flores by redistricting. This race is considered a 50-50 battle right now. Flores has been backed by a wave of national Republicans who have campaigned for her.

NEBRASKA: Rep. Don Bacon, a three-term member in the 2nd District, has continued to hold a district that repeatedly backed Democratic presidential candidates in recent campaigns. Bacon drew criticism from former President Donald Trump and others on the right for voting for the bipartisan infrastructure bill last year. Bacon has campaigned on working across the aisle, and he co-sponsored the Growing Climate Solutions Act with Spanberger. He is in a battle, but favored, against Democratic state Sen. Tony Vargas. In the Nebraska Unicameral, Vargas spearheaded the first legislative hearing nationally on the health and safety of meatpacking workers during the pandemic.

Three Republicans who definitely won't return to the committee.

ILLINOIS: Rep. Rodney Davis of Illinois' 13th District, a five-term incumbent, will not return next year after losing a primary race following redistricting.

MISSOURI: Rep. Vicky Hartzler of Missouri's 4th District has served in Congress since 2011 but lost the GOP primary for U.S. Senate and effectively lost her district as well.

Davis and Hartzler have been stalwarts on various issues in the committee and their voices will be missed in the debate over the next farm bill.

NEW YORK: Freshman Rep. Chris Jacobs of the New York 27th District lost GOP support and announced he would not seek re-election after he chose to support a ban on assault weapons following a mass shooting at a Buffalo, New York, grocery store earlier this year. 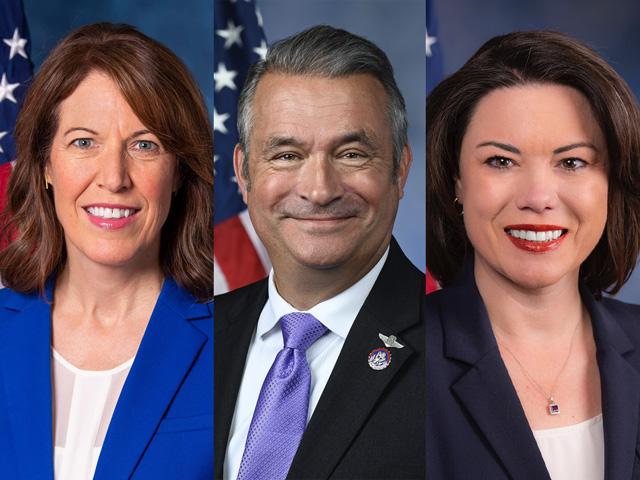