DETROIT LAKES, Minn. (DTN) -- A group of agricultural leaders from the upper Midwest gathered this week at this lakeside community to dive into the weeds of farm policy to see how producer groups and agribusinesses in the upper Midwest could have more influence on the farm bill.

The policy talks marked the inaugural meeting of the Midwest Council on Agriculture, a group including more than 90 members representing farm and agribusiness groups in Minnesota, North Dakota, South Dakota, Nebraska, Iowa, Illinois and Wisconsin.

The Midwest Council is the brainchild of former House Agriculture Committee Chairman Collin Peterson, a veteran Democratic lawmaker who lost his Minnesota congressional seat in 2020. Peterson served in Congress for two decades and spent nearly all of that time working on agricultural issues, serving as the Democratic leader on multiple farm bills.

Peterson's influence in agricultural policy was evident from the people who spoke on Monday and Tuesday, including USDA Under Secretary for Rural Development Xochitl Torres Small and Farm Service Agency Administrator Zach Ducheneaux.

The former congressman said he modeled the Midwest Council on Agriculture after similar groups in Texas.

Peterson, seeing the influence that southern agriculture has on policy debate involving commodity prices and programs, wants more policy focus on agriculture in the upper Midwest and Northern Plain states.

"We're going to try to emulate what they do in the South," Peterson said. Pointing to the extent of agriculture in the northern Midwest, he added, "We haven't really leveraged all of this power the way we should."

Stemming from the Midwest Council, Peterson wants a land-grant university center in the upper Midwest to lead an agricultural economics program similar to what economist Joe Outlaw oversees at Texas A&M University. Nearly 40 years ago, Texas A&M got a federal funding earmark to create the Agricultural and Food Policy Center (AFPC) in the A&M Department of Agricultural Economics. The group continues to receive federal funds to analyze farm and agricultural policies.

Over the decades, AFPC has evolved into the go-to group for policy and its impacts on farmers. Outlaw and AFPC's team of economists are frequently asked by the House and Senate Agriculture Committee to examine policy implications of certain scenarios by running models based on 94 representative commodity farms in 30 states. The group's reports are cited to reflect the positive or negative impacts of those policies, such as last year when AFPC's report showed 98% of its representative farms would be negatively affected by proposed changes to the estate tax, capital gains and stepped-up basis.

Outlaw also is frequently called to Capitol Hill to testify on AFPC's analysis.

Peterson said, "I want to have somebody from here people know and Congress calls that guy to let them know what his happening here."

He doesn't want to directly replicate what A&M does, Peterson added, but he wants to see a university economists' voice similar to what Outlaw provides.

A&M's work helps guide an agricultural council made up of producer groups, as well as a separate agribusiness council made up of equipment and chemical dealers whose businesses are heavily impacted by farm policy. Outlaw explained one reason why it's important to have organized local and regional voices for policy debates such as the farm bill.

"Sometimes the lobbyists on the national level don't represent the producers in this room very well," he said.

Outlaw noted it's important for producer groups to make their case for their needs. "Southern agriculture is very good at organizing and complaining and trying to get our way." Outlaw added, "If you don't ask for something in Washington, you get nothing."

"Agriculture is insignificant in Washington if everyone is fighting against each other in the room," Outlaw said, emphasizing a cohesive voice.

As far as creating an academic center similar to AFPC, Peterson and others met Monday with economists from some of the universities in the seven Midwest states. He wants to avoid duplication with AFPC but added that he thinks a Midwest-oriented center could focus more policy analysis on areas such as crop insurance, livestock production such as dairy, as well as biofuels. Peterson added that the council members also could look to expand into states such as Missouri, Kansas and Indiana.

Talking about farm payments, Outlaw said agriculture overall is in better shape to handle a price decline, partially due to tens of billions of dollars pumped into the sector by both the Trump and Biden administrations. As farm payments have come to farmers in recent years for trade assistance or disasters, Outlaw said farmers have increasingly questioned the payments.

"Yes, it was nice, but I didn't deserve it," Outlaw said he hears from producers.

But production agriculture is in better financial condition because of all of those various aid programs. Still, there are farmers who have borrowed extensively to continue farming.

"We do need the input prices to moderate and the (commodity) prices not to fall," Outlaw said.

Outlaw pointed to projections by the Congressional Budget Office forecasting corn prices coming back to $4 a bushel. "We've got some real adjustments coming to this country, for sure," he said.

While finding more funds for the farm bill could be difficult, commodity groups have been vocal that the Agricultural Risk Coverage (ARC) and Price Loss Coverage (PLC) safety net reference prices are too low to protect farmers from a major price collapse.

"Reference prices need to go up," Peterson said. He added, "One of the things I'm worried about is where this latest price spike is going to take us." Farm prices tend to come crashing down while input prices often remain high. "I'm not sure they are going to come down."

Peterson and Outlaw delved into the weeds of farm bill policy, pointing out the billions of dollars pumped into commodity payments, disaster payments and now conservation programs will not increase the "baseline" money that goes into the farm bill.

"This whole farm bill process is going to be very complicated," Peterson said, adding that the bill is unlikely to be done by October 2023, when the current bill expires.

If Republicans take the House, as forecast, that will lead to a swing in committee staff, new hires, and new members on the Agriculture Committee. Rep. Glenn "GT" Thompson, R-Pa., the current committee ranking member, would then have to guide a farm bill through a GOP caucus that has repeatedly tried to cut food-aid programs. Farm bill votes failed on the floor in 2013 and 2018 over attempts to do that. If Republicans passed such a bill, "I'll guarantee you Joe Biden will veto that bill," he said.

Peterson said he expects the current farm bill will be extended in law through 2024, and possibly into 2025 after the presidential election.

"I'm very skeptical they will be able to get this thing done," he said. "At the end of the day, they'll end up extending it."

Peterson also pointed to the Republican Study Committee budget plan released earlier this summer. More than 160 GOP members are part of that group. The GOP plan for agriculture proposes cuts to nearly every major program in the farm bill, including commodity programs and crop insurance.

"All the new GOP members, that's their official position," he said. 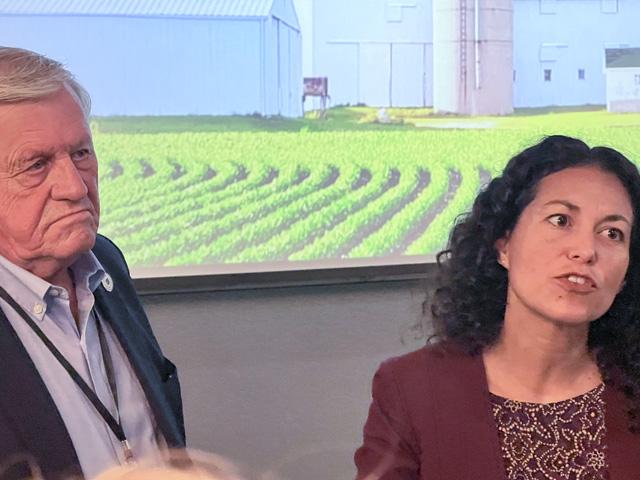