OMAHA (DTN) -- The details of how USDA will spend $9.25 billion of disaster aid for crop producers should be announced in the next couple of weeks with payments potentially starting in June, Agriculture Secretary Tom Vilsack said Tuesday.

Vilsack testified before a Senate Ag Appropriations Subcommittee for USDA fiscal-year 2023 spending plans. The secretary was quizzed by senators about an array of issues, though disaster aid, boosting crop production and international food aid were dominant themes in the hearing.

From $10 billion provided by Congress last fall to deal with weather disasters from 2020 and 2021, Vilsack said USDA is finalizing work that will "pre-fill" applications under the Wildfire and Hurricane Indemnity Program-Plus (WHIP-Plus) that farmers have typically filled out in past years. WHIP-Plus applications had roughly 250 questions producers had to answer to receive disaster aid. Instead, a lot of those questions will be filled in with crop insurance info or data from other USDA programs, Vilsack said.

"So, at the end of the day, there will be just a handful of boxes that will have to be checked and signed," the secretary said in response to questions from Sen. John Hoeven, R-N.D.

That work is getting close to being complete and Vilsack said USDA is expecting to release enrollment details later this month with checks likely going out in June.

Like the livestock aid released in April, Vilsack said the next round of WHIP-Plus will consist of two tranches of payments. That second tranche of funding will be held back to help producers who might be left out of the first round of payments.

"There may be people that are left out in that process so there'll be a smaller second round of funding after the June payments," Vilsack said.

While senators and Vilsack used the term "WHIP-Plus" to describe the disaster aid, USDA in late March stated it was working on the "Emergency Relief Program" (ERP) for row crops and specialty crops hit by natural disasters in 2020 and 2021.

Sen. Jon Tester, D-Mont., who farms in north-central Montana, said at the hearing the drought last year was the worst he had experienced as a farmer.

"If we don't get a rain, it's going to be worse than last year."

Tester said of the disaster aid, "This is critically life-and-death money" as drought has driven hay prices "through the roof."

USDA has sent out about $560 million to more than 100,000 livestock producers under the Emergency Livestock Relief Program (ELRP). Vilsack said another $190 million is available under ELRP that will go to producers who were not covered by the Livestock Forage Program, or perhaps also faced a shallow loss.

On the ELRP, Sen. Jerry Moran, R-Kan., pointed to a December wildfire in his state that burned 160,000-plus acres in 13 counties. Producers apparently may not qualify for some aid because they "lost forage and grazing lands to wildfires outside of normal grazing periods," Moran said. Vilsack responded USDA is putting together a list of "non-covered" disasters to cover with that second tranche of funds.

"Our disaster assistance programs are sort of a one-size-fits all, and the reality is there are multiple types of disasters in multiple different areas involving multiple commodities and in multiple, different ways," Vilsack said, adding that flexibility and resources are needed to address the range of weather disasters impacting farmers and ranchers.

Hoeven asked Vilsack to make some adjustments to the Livestock Indemnity Program (LIP). For calves under 250 pounds that may have died in the recent blizzards, Hoeven said the payment rate "is really not reflective of the cost of those animals." Hoeven also noted there are situations in which calves hit by such storms become sick and die later. Vilsack said USDA "is taking a look" at the payment rates as well as the cause of a livestock loss that could come after the fact.

"So, both of those issues are being looked at by the team," Vilsack said.

As Congress negotiates a $40 billion aid package that President Joe Biden has called on Congress to pass immediately, the $500 million expected to go to farmers may now be off the table.

Politico reported Tuesday afternoon that House Democrats did not include the $500 million for U.S. farmer in a package that they now have bumped up from a $33 billion initial White House proposal to potentially $40 billion.

Politico quotes Vilsack saying, "Forget the $500 million, forget it. It's not in the bill."

Yet, just a few hours earlier Moran asked Vilsack about the $500 million that would go to U.S. farmers to boost production of crops such as wheat and oilseeds.

Moran noted part of the aid detailed by the White House includes $10-per-acre payments to farmers to double-crop soybeans after wheat. Moran reminded Vilsack, "Sorghum is a major food crop for many African nations," and another lost export from Ukraine could be sunflower oil (Ukraine exports 50% of the world's production). Both sorghum and sunflowers are major Kansas crops. Vilsack said in the hearing that multiple options are on the table.

"It was a conversation starter, and you are absolutely right, there is no reason why we shouldn't include those. We should," Vilsack told Moran.

Vilsack also said he is bothered that it will cost more to ship U.S. commodities recently purchased with funds from the Bill Emerson Humanitarian Trust than it cost to buy them.

"It's amazing to me it costs more than the value of that product we're transporting to get that food to Ethiopia or some of the North African countries," Vilsack said.

Adding that transportation cost "needs to be addressed, Vilsack's comments appear to give some sign of support to a proposal by Sens. Chris Coons, D-Del., and Joni Ernst, R-Iowa, to temporarily waive the current U.S. law requiring that 50% of food aid shipments -- by tonnage -- be carried on U.S.-flagged vessels staffed by crews in which at least 75% of the sailors are U.S. citizens.

Under current law, the president, the defense secretary or Congress can waive the 50% cargo preference requirement temporarily.

Vilsack also noted he is traveling to Germany and Poland on Thursday to assess the situation in Ukraine and its impact.

The secretary also tied his "Partnerships for Climate-Smart Commodities" pilot program to ways USDA can boost farmer incomes while providing incentives for efforts such as double cropping acres. The climate-smart program, which had a deadline for major funding projects last week, received 450 applications across all 50 states for pilot projects. Vilsack said the funding requests amount to three or four times the $1 billion USDA put on the table for the pilot projects. Vilsack said at least some of those proposals could expand double-cropping opportunities to boost production.

"One thing we could do is look for greater ways to help double-cropping opportunities, expand the number of counties that are insured, and figure out other administrative ways to make it easier for farmers, reducing the risk of double cropping," Vilsack said. 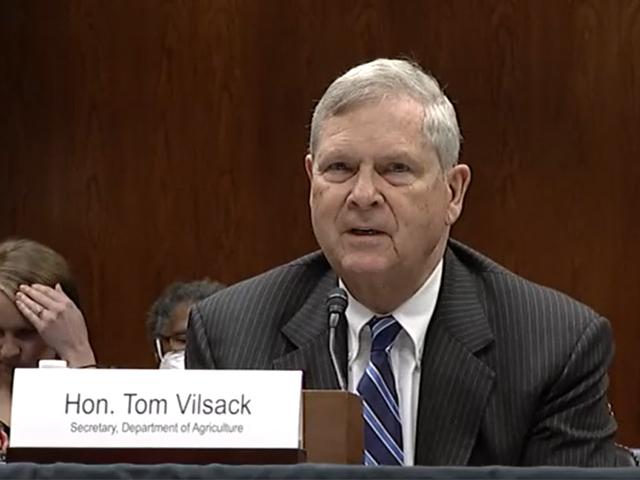